An Award-winning Spanish-language Newsman Has Been Fired From His Post At Univision For Comparing America's First Lady To An Ape. 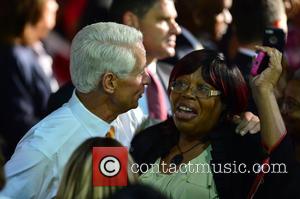 During Wednesday's (11Mar15) broadcast of El Gordo y la Flaca, as the hosts were talking about a talented make-up artist who can transform himself into celebrities, including Michelle Obama, Rodner Figueroa made an ill-advised comment and found himself in trouble with network bosses.

He said: "Watch out, you know that Michelle Obama looks like she's from the cast of Planet of the Apes, the movie."

Confirming the Daytime Emmy Award winner's dismissal on Thursday (12Mar15), Univision executives called Figueroa's comments "completely reprehensible", adding, they "in no way reflect the values or opinions" of the network.

Figueroa had been part of the El Gordo y la Flaca show for 15 years. He has yet to respond to news of his dismissal.