It's getting ever closer to the 2016 US Presidential Election, where we'll tearfully bid farewell to the coolest President America has ever seen, as well as his accomplished First Lady Michelle Obama. She took to the 'Late Show With Stephen Colbert' on Tuesday night (September 20th 2016) where pure hilarity ensued. 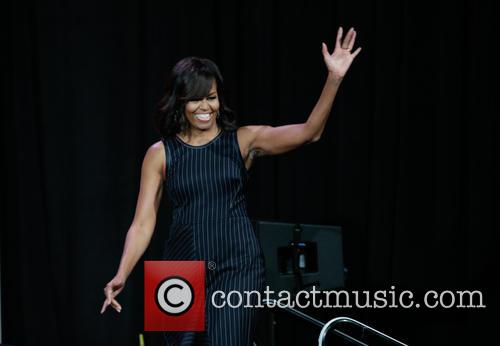 Michelle Obama discussed everything from her global initiative to educate girls all over the world (Let Girls Learn) to the Melania Trump controversy. As it turns out, Michelle has 'no sympathy' for the spouses of the presidential candidates, even in the case of Donald Trump's wife who was blasted for plagiarism when she lifted much of Michelle's 2008 address for her Republican National Convention speech.

'Yeah, that was tough', she said of Melania's situation, a broad grin across her face. She added that she hopes the candidates' spouses 'stand proudly' behind them, and not appeal for sympathy. 'Bottom line is if I didn't agree with what Barack was saying, I would not support his run', she said.

On a less serious note, Michelle did a hilarious impression of Barack discussing global issues at the dinner table, which Michelle admits can be a bit of a bore when all she wants to do is talk about Beyonce's 'Lemonade' album. 'He's really into gossip because he doesn't have a life', she added.

Speaking of Beyonce, she had a lot to say about her too. 'She's a sweetheart. She's smart, she's creative, she's a great mother, she loves her family', she said. 'She's just a low-key lady, so we have a lot in common in that way. Except I can't sing, I can't dance.'

Indeed, the thing we've always loved most about the Obamas is their down-to-earth attitude to the world. Michelle wasted no time in telling how their sleepover at Buckingham Palace was one of the craziest moments of being the First Lady of the United States. 'It was when they hosted us for the State Dinner and when you're the guest country you stay at Buckingham Palace', she explained. 'I do remember ordering French fries at the Palace. They were good. They were some good fries at the Palace.'

She even admitted to calling Barack Obama 'swagalicious', to Stephen Colbert's intrigue. 'It's a person that has a lot of swag. And if you don't know what swag is Steve, you definitely don't have it', she teased.