Does it make you want to get up and dance?

We didn't think it was possible to pack this much awesomeness into one sentence, but here it is: Michelle Obama and Ellen Degeneres just posted a video of themselves dancing to Uptown Funk. 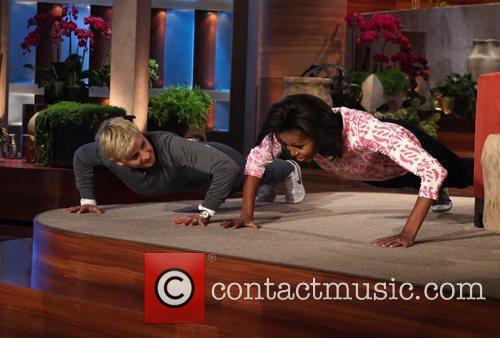 Ellen and the First Lady are actually age-old workout buddies.

It was all in honour of the FOTUS' Let's Move campaign, its five year anniversary, to be precise. So, being the skilled multi-tasker that she is, Mrs. Obama decided to kill two (actually, several) birds with one stone.

"You're doing something new at the White House for the Easter Egg Roll, right?" the host asked.

"In honor of the fifth anniversary [of the Let's Move campaign] I've issued this challenge. We're calling it #GimmeFive and we're using the hashtag #GimmeFive on social media," Michelle said. "We're asking folks all across the country to #GimmeFive ways their leading a healthy life. We've got a lot of celebrities involved," she said, thanking Beyonce, Nick Jonas and Ryan Seacrest for their involvement. "We're gonna take over the Easter Egg Roll this year with a #GimmeFive dance, and actually the 'So You Think You Can Dance' all stars are coming to the Easter Egg Roll to teach the whole South Lawn this dance."

And those weren't the only celebrities to take  on the challenge. Mrs Obama then added, "I have actually challenged this woman right here to learn the #GimmeFive dance."

And dance she did. To great success, we might add. Check out the video below.

It's been a very media-heavy week for the first family. While Michelle was breaking it down on Ellen, the POTUS himself joined Jimmy Kimmel in reading some mean tweets. Clearly, one of the coolest first couples out there.