By Andy Peterson in Music Reviews on 04 March 2013

One of the fringe benefits of being in an eternally nerdy group like The Magic Numbers is that their lack of rock n' roll antics means their gelt is spent on something more rational than a Ferrari. In the case of the band, their bassist Michele Stodart co-founded with her brother Romeo and fellow sibling duo Angela and Sean Gannon their professional loot has been wisely invested in the building of a recording studio, a hideaway in which her début solo album Wide-Eyed Crossing was recorded. 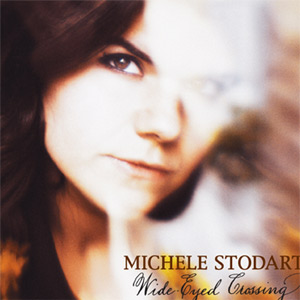 Stodart's musical family ensured that she was reared on a kaleidoscopic listening diet, one that included the likes of Patsy Cline and Hank Williams, and at times their influence is writ large, especially on the desultory 'Take Your Loving Back' and 'O Heart of Mine'. If neither has the older star's toothsome panache, they do both share a sense of vulnerability which eventually brought their inspirations low; just as fascinating is the singer's extension of the chassis over a blues syntax, her duet with Villagers much feted Conor O' Brien on 'Invitation To The Blues' melding the two archaic genres together with strident aplomb.

As you may have guessed, this is life through the kind of personal, painful lens which we no longer allow celebrities to have without usually insisting they share every visceral detail of it; that Wide Eyed Crossing is so intimate speaks volumes for an artist who also played every note of the record. At its most affecting - on the frankly lovely and Magic Numbers-esque 'My Baby, My Sweet' - there is a feeling of reading someone else's love letters, at once uncomfortably voyeuristic but also tinged with bystander romance.