The New Adventures Of Aladdin Trailer

While it might look like an anachronistic live action reimagining of the classic Eastern folk tale, 'The New Adventures of Aladdin' is actually based on a story told by a pair of thieves at a department store on Christmas Eve. Sam and Khalid are best pals and partners in crime who decided to dress up as Santa Claus for their latest robbery, however their plan is foiled by a group of kids who demand they tell them a story. With the store owner also urging them to relay a tale, they decided to launch into their own version of Aladdin. Set in the city of Baghdad many years ago where taxis are magic carpets that still need stop signs, where magic lamps lock like iPhones and people sell knock-off CDs from the future in the street, Sam tells of the tyrannous rule of Vizir who Aladdin plans to defeat with the help of an effeminate Genie and hopefully win the heart of the beautiful Princess Shallia along the way.

Nenette is an ageing woman with mental disabilities which has meant that she has lived with her mother all her life. Her father left a long time ago and so, following the inevitable death of her mother, she is forced to seek care elsewhere and approaches a home for people in need of general living assistance. However, as they refuse to allow her to bring her pets along with her, she decides to track down her father, but after getting lost on the way, she is picked up by a group of punks travelling from a party who take her to see her half-brother Paul instead. Paul is a pharmacist known by his family and colleagues as being particularly uncheerful and dismissive. Characteristically, he has no time for Nenette, but after she slips him a few ecstasy pills in his coffee from her punk friends, he agrees to let her stay. Unfortunately for Nenette though, the high doesn't last forever, and his ensuing comedown is likely to be worse for her. 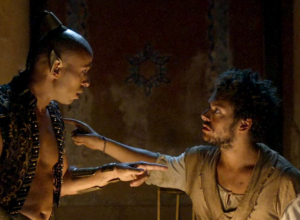 The New Adventures Of Aladdin Trailer Nenette is an ageing woman with mental disabilities which has meant that she has lived...