Political documentaries tend to get the blood boiling, and this is no exception, as it keeps us entertained with a lucid exploration of just how our governments have failed us economically. The central topic is income inequality, and having a riotous figure like Russell Brand front and centre brings the issues home in a clear, infuriating way. Director Michael Winterbottom does a terrific job reining Brand in, keeping him on-point and making sure the details are clearly presented. 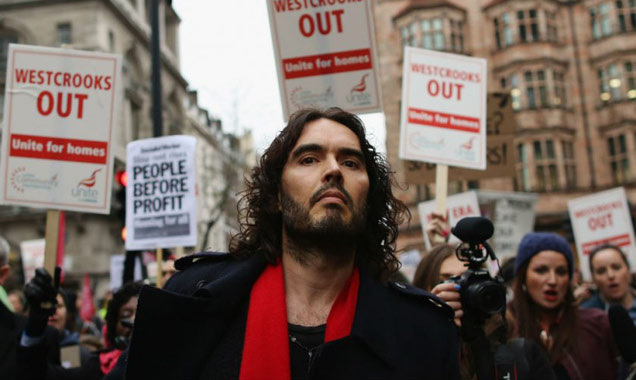 Right from the start Brand says that there's nothing in this film we don't already know. But he's connecting the dots in ways that the media certainly isn't willing to do, because they're part of the problem. Indeed, as he works with a classroom of young students, he proves that even a child can understand that our system simply isn't fair: the rich are getting richer, but the poor are struggling more than ever as the gap between them grows out of all proportion. Instead of tackling this problem, the politicians simply deflect it, blaming something as essentially irrelevant as immigration while neglecting a fundamental human value we all teach our children: sharing.

The film goes back in history to explore how we got here. In the 1970s, the wealthy earned 10 times what their lowest-paid employees earned, but the policies of Reagan and Thatcher shifted the balance to the rich, arguing that the cash would trickle down into the rest of society. But that has never happened. Companies and banks only consolidated power and profits, as the free market system made the highest-earning 1 percent even more greedy and selfish than they were before. Now top earners get up to 300 times what their employees are paid. No wonder people are broke, small businesses are failing and towns are in bankruptcy, while the rich just get richer.

The British model is taking to the big screen like a duck to water.

Cara Delevingne returns to the big screen in Michael Winterbottom's psychological murder thriller 'The Face Of An Angel' based on the true case of Amanda Knox. It marks the first of a string of movies she has lined up to properly kick start her acting career. 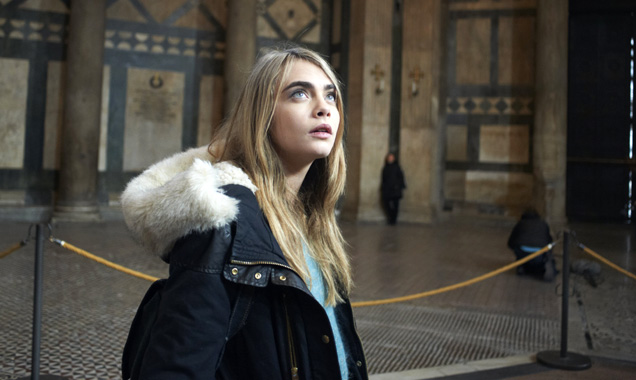 The charismatic British model, best known for her extraordinary eyebrows, will make her second feature film appearance, having previously starred as Princess Sorokina in the 2012 adaptation of Tolstoy's 'Anna Karenina'. This time she plays a tour guide named Melanie who befriends a filmmaker named Thomas (Daniel Bruhl) in this unusual story of a brutal murder, with an unlikely suspect at the bottom of it. When a beautiful young woman named Elizabeth (Sai Bennett) is found dead in Italy, her supposed friend Jessica (Genevieve Gaunt) immediately faces scrutiny; however, with her own good looks, she seems just as unlikely a perpetrator as Elizabeth was a victim. Kate Beckinsale plays Simone Ford, a writer who's been obsessively covering the case from the beginning.

Continue reading: Cara Delevingne Swaps Modelling For Mystery And Murder In 'The Face Of An Angel' [Trailer]

'Face of an Angel' looks a little....Hollywood.

Footage from Michael Winterbottom's Amanda Knox-inspired movie Face of An Angel has premiered on Variety's website. A fictionalisation of the much-publicised murder investigation and subsequent sentences, Winterbottom's movie stars the underrated Daniel Bruhl, the overrated Kate Beckinsale and the frankly untested Cara Delevingne. 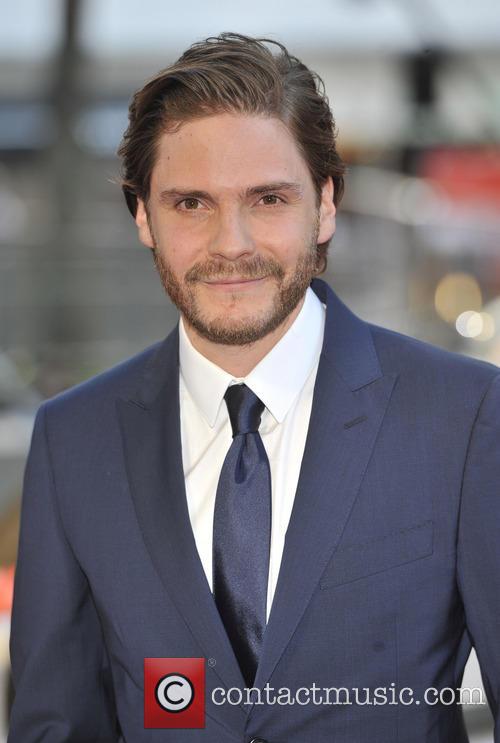 Daniel Bruhl Stars in 'Face of an Angel'

Based on the book Angel Face: Sex, Murder and the Inside Story of Amanda Knox by journalist by Barbie Latza Nadeau, Winterbottom's movie follows a filmmaker (Bruhl) who travels to Italy to research a film adaptation of the book with its author (Beckinsale).

The two star are back in another foody adventure, with impressions, banter and more foolhardy action

2010's The Trip was a surprise success when it was released to a limited audience and an immense amount of critical praise. It's success was such a surprise because, to put it bluntly, not a lot really happens in The Trip other than some arguments, a few Michael Caine impressions and the occasional bit of womanising from Coogan. Oh yes, and lots of food. That formula proved so successful that the two have been shipped out on a food adventure once again, this time tasting what Italy has to offer. Michael Winterbottom is back in the driving seat for The Trip to Italy, taking stars Rob Brydon and Steve Coogan across a culinary map of Italy for the sake of a food journalism (kind of).

Kate Beckinsale Added To Amanda Knox Movie, 'The Face Of An Angel'

Kate joins Cara Delevingne in a movie based on the killing of Meredith Kercher.

Kate Beckinsale is the latest actress to be added to the cast list of upcoming crime movie, The Face of An Angel, which will be based upon the events and investigation into the violent murder of British student Meredith Kercher in Italy and the group of people tried for the crime. 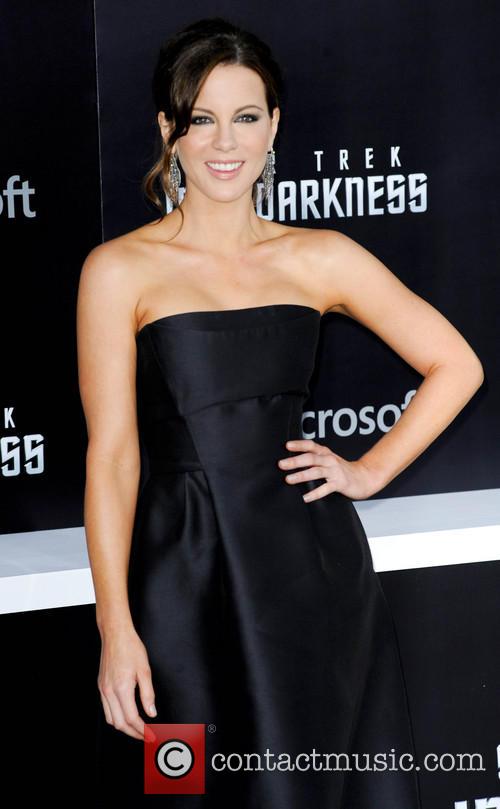 Kate Beckinsale Joins 'The Face Of An Angel.'

Directed by Michael Winterbottom, the movie will be adapted from Barbie Latza Nadeau's book, Angel Face: Sex, Murder and the Inside Story of Amanda Knox, which references murder suspect Amanda Knox who is a central suspect in the case. Upcoming biopic 'The Look of Love' based on the life of glamour entrepreneur Paul Raymond hit London yesterday (April 15th 2013) in its premiere with all the pizazz that Soho could offer.

'Alan Partridge' star Steve Coogan still seemed a little in character, shunning a tie and opting for an eye-catching shirt with several top buttons undone when he hit the red carpet at the Curzon Soho in London alongside his glamorous co-stars Anna Friel and Tamsin Egerton who play his onscreen wife and daughter respectively. While Anna was positively glowing in her ankle length yellow and gold dress that certainly matched up to the glorious English Springtime, Tamsin opted for a white, long-sleeved, floor-length number that flattered her elegant frame.  Former 'Mock The Week' host Chris Addison and current host Dara O'Briain also made appearances on the red carpet having both featured in the biographical comedy, as well as 'Boy Meets Girl' star James Lance who played Raymond's business associate Carl Snitcher in the movie.

By Rich Cline
Good
With this darkly edgy romance, Winterbottom adapts his third Thomas Hardy novel, Tess of the d'Urbervilles, and sets the action in India. It's colourful and dramatic, but lacks the passion the story requires to grab our emotions.

When her father loses his livelihood in a traffic accident, Trishna (Pinto) needs to support her family in Rajasthan. So she takes a job offered by flirty tourist Jay (Ahmed), who works at his father's hotel in Jaipur. When Jay pushes their relationship further, Trishna runs home. But Jay finds her and talks her into moving with him to Mumbai, where they can live together while he pursues his dream of being a film producer. And as he becomes more distant, Trishna wonders if she's made a terrible mistake.