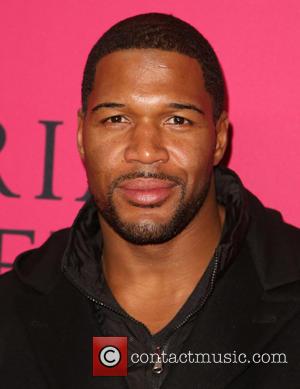 Michael Strahan is officially the newest co-host of 'Good Mroning America' after arriving with a red carpet welcome to the breakfast show.

The former NFL star walked onto set just after 8 a.m. while a video tribute was aired of his successful career in sports and television.

While making his way into the studio, fans on either side of Strahan screamed emphatically as he was met by 'GMA' co-hosts Robin Roberts, Lara Spencer, George Stephanopoulos and Amy Robach.

And it seems his new college, the 53 year-old Roberts, couldn't be happier for him.

When speaking with People magazine the longtime news anchor said, "Talk about somebody who's the real deal," when referring to Strahan.

"He's pure talent," she continued to gush over the 42 year-old, who will be joining 'GMA' several times a week while still continuing his co-hosting duties on 'Live! With Kelly and Michael.'

But it looks like the former NFL Super Bowl winner will be able to handle the task as it didn't take long for him to command the attention during his debut.

"When I'm here a few days a week, does that play every time?" he jokingly asked the other co-host, referring to the elaborate entrance.

Strahan announced that he would be joining the 'GMA' team on April 2nd, and it was reported that NBC executives had been working to acquire the former New York Giants star for several months.

This just followed the news of Josh Elliot, who featured on the morning show since 2011, walking out on the show to work for their arch rivals NBC on March 31st.

Amy Robach was announced as the replacement for the departed Elliot, shortly after he left.

Strahan will still co-host with Kelly Ripa on 'Live! With Kelly And Michael'