There's enough charming energy in this loose London music scene comedy to keep us entertained, but the plot drives us round the bend by refusing to go anywhere. Yes, this is one of those achingly British films that pulls the rug out from under its characters (and indeed its audience) every time they're threatened with even a moment of happiness.

Our hero is Dixie (Jonny Owen), who leaves rural Wales when he discovers a band on YouTube that he thinks he can manage into stardom. In London, he discovers that the Premature Congratulations (Michael Sosha, Dylan Edwards, Joel Fry and Curtis Thomson) are four hapless young men who make great music but have barely a whiff of common sense between them. So his efforts to promote them are more difficult than expected, especially since his record-exec childhood friend Horsey (Roger Evans) won't give him the time of day. Then just as Dixie's girlfriend Shell (Vicky McClure) gets fed up with his debt-incurring ways, The Prems suddenly become the hottest unsigned band in London.

Not that Dixie is capable of getting them signed to one of the labels clamouring for them. No, this is one of those movies in which everything goes wrong on cue. Not only does success remain tantalisingly out of reach, but Dixie also has problems with a loan shark (Michael Smiley) and a surly record-shop boss (Martin Freeman). And his father is dying too. These are far too many obstacles for a scruffy little movie, and not one of them feels either relevant or necessary. It's merely Owen the screenwriter torturing Owen the actor. He may be relentlessly charming on-screen, but it's all so contrived that we know it's pointless to care about anything.

Dixie is a Welsh postman who has arrived in London to follow his dreams of becoming the next big music mogul. After months of watching YouTube videos, he comes across The Premature Congratulations - a band that he thinks could make it big. Teaming up with his partner Michelle, he searches for the band and offers to be their manager. They're initially nonchalant about the situation, but they start to grow in confidence as Dixie lands them more and more gigs. However, they also start lacking in appreciation for poor Dixie, who is struggling to pay his rent on very little income and is facing difficult times ahead if he wants to communicate with the major powers of the UK music industry. With The Prems slowly slipping from his grasp and Michelle becoming increasingly more frustrated with him, Dixie is forced to think carefully about his future both privately and professionally.

This musical comedy is about the struggles of the backbone of any music industry - the managers. It was written by and stars Jonny Owen in his screenwriting debut, and was directed by John Hardwick ('33X Around the Sun'). 'Svengali' is due for release in cinemas on March 21st 2014 and on DVD and Blu-ray on April 7th.

'Once Upon A Time In Wonderland' has received rather average reviews from critics following its premiere episode last night (10th October).

Once Upon A Time In Wonderland aired on ABC last night (Thursday 10th October). The sequel to the popular series is a mash-up of Alice's Adventures in Wonderland, Aladdin and the Arabian Nights. The premiere episode entitled (originally) Down the Rabbit Hole. 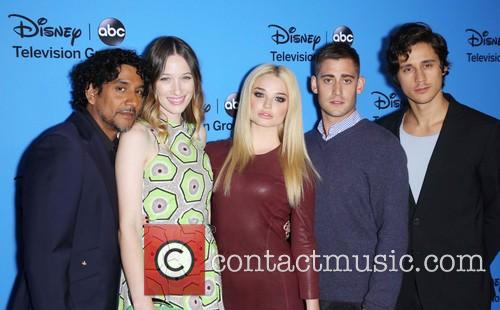 Some of the Once Upon A Time In Wonderland cast (L-R): Naveen Andrews, Sophie Lowe, Emma Rigby, Michael Socha and Peter Gadiot.

Alice has been to Wonderland twice: once when she followed the White Rabbit and the second time when she intended to prove it wasn't all a figment of her child's imagination. On the last occasion she fell in love with a genie but lost him after the Red Queen (Emma Rigby) and a magic-carpet rider Jafar (Naveen Andrews) plotted against him.

Continue reading: 'Once Upon A Time In Wonderland', Critics Say, Is Not So Wonderful