It's been two months since the Guardians of the Galaxy defeated the evil Ronan, and their prize is freedom and a clean criminal record. Finally. These guys are truly inseparable now; Baby Groot's (Vin Diesel) rebirth has meant that he has a lot of growing up to do and is relying on Rocket (Bradley Cooper) to keep him on the straight and narrow (not that he's great with kids or anything), Drax the Destroyer (Dave Bautista) hasn't changed a bit and Peter Quill (Chris Pratt), who is still using the name Star Lord, has started to develop seriously cuddly feelings towards the feisty Gamora (Zoe Saldana). Their latest mission is to track down Quill's alien father, but they are not alone. Joining them on their new galactic journey is Gamora's changeable sister Nebula (Karen Gillan), Quill's (kind of) adoptive father Yondu Udonta (Michael Rooker) and antennaed newcomer Mantis (Pom Klementieff).

The Guardians return two months after their epic battle against Ronan with their criminal records erased and a feeling of peace with the knowledge that the highly destructive Infinity Stone is in the hands of Nova Corps. Groot is doing his best to grow up, but he has a lot to learn now that he has been reborn as Baby Groot and that's something that is a permanent frustration for his partner in crime Rocket. Meanwhile, Drax is still hopeless when it comes to sensitivity or discretion, making things very awkward for Peter Quill most of the time because he just can't keep his mouth shut about Quill's feelings for Gamora. This ragtag team have more serious things to deal with howevever; Quill has learned that he is actually only half-human, and his alien father of unknown origin resides somewhere in the cosmos.

Five of our favourite unlikely heroes re-assemble in Guardians Of The Galaxy Vol. 2. The second instalment of the movie takes place only months after the first ended.

Having defeated Ronan and saved the universe from impending doom, Star-Lord, Gamora, Drax the Destroyer, Rocket and Groot are travelling through space together but keeping the small crew of rebels isn't going to be easy.

At the end of the first film, everybody thought that Groot was a gonner but thankfully is old buddies Groot made new roots and was saved.

The Guardians of the Galaxy stars were on-hand to promote the movie - still a year off - at Comic Con 2013.

Though it was Thor 2, Breaking Bad and The Hunger Games that made headlines at Comic-Con, the Guardians of the Galaxy gang were about to promote James Gunn's movie, which is still a way off - set for release on August 1, 2014.

A newly bald Karen Gillan - who shaved her head for the film - discussed getting in shape for the high-octane movie, telling us on the red-carpet, "I feel like I'm in an action movie bootcamp right now where I am on set everyday learning how to fight and I'm training like crazy and it's a really cool way to get into the character I think."

Her co-star Lee Pace praised the movie's director, saying: "James Gunn has got a great vision for the movie. He just showed us a little clip of what he's been working on for the past 10 days and it's excellent."

Michael Rooker and Dave Bautista talk about how much they've enjoyed 2013's Comic-Con in San Diego where they were promoting and screening clips from their new movie 'Guardians of the Galaxy'.

Continue: Video - Michael Rooker And Dave Bautista From 'Guardians Of The Galaxy' Are Loving Comic-Con 2013

Karen Gillan, who is best known for her character Amy Pond, the companion to Matt's Smith's incarnation of BBC's Doctor Who, has been cast as the "lead female villain" in Marvel Studios' upcoming Guardians of the Galaxy, according to The Hollywood Reporter.

Gillan, who now resides in Los Angeles, is the latest star to be added to the growing cast list for the movie, including Glenn Close, Zoe Saldana, Chris Pratt, Lee Pace, and Michael Rooker.

The 25 year-old Scottish actress from Inverness, is keeping herself busy with an additional part in upcoming indie supernatural horror Oculus (dir. Mike Flanagan), alongside Katee Sackhoff.

Continue reading: Doctor Who's Karen Gillan Cast As Lead Villain In Marvel's Guardians Of The Galaxy

Glenn Close will play a role similar to Samuel L Jackson's in The Avengers.

Well this is a surprising casting, though one that sort of makes a ton of sense. According to the Deadline.com, Marvel Studios has landed Oscar winning actress Glenn Close to play a major new role in its latest franchise, Guardians of the Galaxy. The actress will reportedly play a leadership role in Nova Corp, the intergalactic space control.

Sources tell Deadline that Close's role will be the closest thing to the one that Samuel L. Jackson plays in The Avengers, though perhaps with more of an edge. Close has proven she can play the hardnosed character in the likes of Damages, Fatal Attraction and, err, 101 Dalmatians and we see her being a real hit in Guardians.

Pair strike up working relationship for the third time

Michael Rooker is to reunite with director James Gunn, for new film Guardians Of The Galaxy.

According to Deadline, Rooker has been cast as Yondu, who apparently is a founding member of the Guardians of the Zatoan tribe in the Marvel Comics series. Yondu is reportedly a skilled hunter with mystic qualities allowing him to build empathetic relationships with a variety of lifeforms. We’ll not lie, we’re not too familiar with this Marvel comic so we’re going to have to go with our source. Props to them for getting Rooker though. Also among the cast is Chris Pratt, who plays Star-Lord, Zoe Saldana as Gamora and Dave Bautista, former WWE wrestler, as Drax. There are various rumours that Bautista might be returning to the WWE, though as yet they haven’t amounted to anything more than chatter going round various wrestling gossip sites.

Rooker and Gunn have a long history together, Rooker starred in 2006’s Slither, directed by Gunn, and worked with him again on 2010’s Super. Both were solid outings and the pair have a great respect for each, so we reckon that his addition to the cast can only be a good thing. The film itself is expected to be released at some point in 2014.

Continue reading: Michael Rooker And James Gunn Teaming Up For 'Guardians Of The Galaxy' 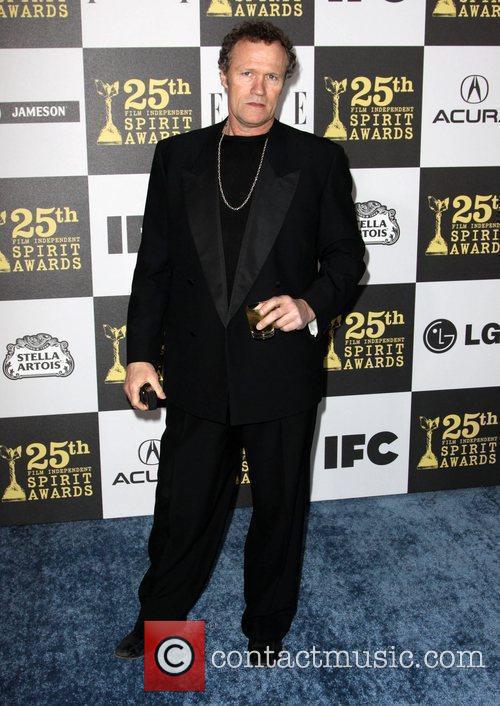 By Keith Breese
Very Good
The word itself, lolling off the tongue as it does, conjures up images of those slick, slimy denizens of swamps, sewers and sloughs. And writer/director James Gunn (2004's Dawn of the Dead) couldn't have picked a more perfect name for this queasy, rollicking throwback to the monster cinema of the drive-in days.

By Christopher Null
Good
Antoine Fuqua tries to blend Hong Kong action fare with gritty urban sensibilities in The Replacement Killers, to mixed effect. Surprisingly, Mira Sorvino holds her own as an unlikely action star, and the shots of her ass don't hurt matters.