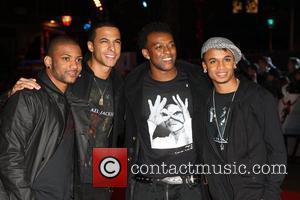 Picture: Jonathan Benjamin Gill aka JB, Marvin Humes, Oritse Williams, and Aston Merrygold of JLS UK film premiere of Michael Jackson's 'This Is It' held at...

THIS IS IT won't be the only film featuring Michael Jackson available to fans this weekend (30Oct-01Nov09) - rare home video footage of the late superstar working with Rock and Roll Hall of Fame hitmakers KENNY GAMBLE and LEON HUFF has hit the Internet.
The legendary producers filmed interviews they carried out with Jackson and his brothers while recording the Jackson 5's first post-Motown albums, The Jacksons and Going Places, in the mid-1970s, and now they're releasing the unseen footage on their website.
The short film features an interview with the Jacksons, which took place a day after they met their hero Muhammad Ali.
And there's a very sweet moment as Michael starts interviewing house producer Dexter Wansel’s two-year-old son on camera, asking, "Is that your daddy? Is that your Daddy right there? Let me see you dance. Can you dance? You can’t dance? Can you sing? He can’t dance, Dex?"
The film footage has brought back wonderful memories for Gamble & Huff.
A joint statement from them reads, "Michael was a great and wonderful artist and performer. We were privileged and honored to record him and his brothers here at Philadelphia International Records... We know his music and legacy will live on for a very long time."