Michael Jackson's children have reportedly been spending time with their biological mother Debbie Rowe in the year since he died of acute Propofol intoxication. 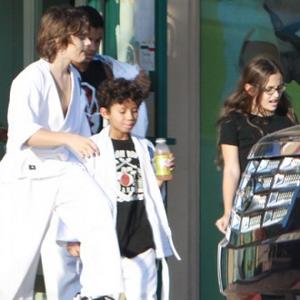 Michael Jackson's children have been spending time with their biological mother.

The late 'Thriller' star's elder children Prince Michael, 13, and 12-year-old Paris have reportedly grown closer to Debbie Rowe - the singer's ex-wife who they previously had no contact with - since his death last June.

The pair's younger brother, eight-year-old Prince Michael II, known as Blanket - whose mother is unknown - has also been included in the regular visits.

Debbie, a 51-year-old dermatology nurse and horse breeder, gave full custody rights to Michael when they divorced in 1999.

However, in addition to the relationship she has built up with her children in recent months, Debbie has reportedly been in contact with Michael's mother Katherine, who is the guardian of Prince, Paris and Blanket.

Katherine recently revealed the trio are to start school in September in the hope they can make some friends of their own age.

She said: "They don't have any friends. They don't go to school, they have private lessons at home - but that will change in September, when they are due to enrol at private college. But they have their cousins and aunts and uncles around them constantly, and that's helped them immensely.

"To them, it's normal, it's the life they have known. They have a certain time to go to bed, then they get up and get dressed for lessons. They practise karate and swim, which they love."