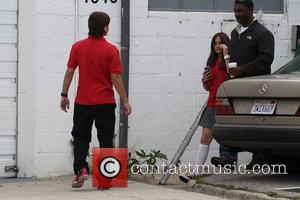 Michael Jackson's iconic 'Thriller' jacket could sell for as much as $400k when it is auctioned later this month. It is estimated that Jackson's recognisable red-and-black jacket will fetch within the region of $200k-$400k but Juliens' Auctions president Darren Julien says he expects the piece of memorabilia to fetch far more, reports CBS News.
The jacket, which the late singer famously wore in his classic 'Thriller' video, will be auctioned alongside memorabilia of The Beatles, Kurt Cobain, Madonna and Lady GaGa at the event on 25-26 June 2011. Auction president Julien said of the jacket, "It is truly the most iconic piece of pop culture history. You see the jacket and you know what it is immediately and who it belonged to". The singer, who died in 2009, gave the jacket to his long-time costumer designers Dennis Tompkins and Michael Bush with a message inscribed in the lining reading, "To Bush and Dennis, All My Love, Michael Jackson". A portion of the proceeds from the sale will benefit the Shambala Preserve, currently home to Jackson's Bengal tigers Thriller and Sabu.
More than 600 other items will be auctioned off at the event taking place in Beverly Hills, most notably, the denim jacket worn by Bruce Springsteen on his 'Born to Run' tour, Frank Sinatra's 1986 Jaguar, handwritten lyrics by Johnny Cash and clothing worn by guitarist SLASH.