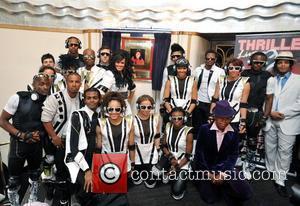 Picture: The unveiling of a Michael Jackson plaque at the Lyric Theatre to commemorate the first anniversary of his death. London, England - 24.06.10

Michael Jackson's mother KATHERINE is convinced the father of the boy who accused the star of sexual abuse committed suicide because of his guilt over masterminding the allegations.
Former dentist Evan Chandler, 65, became estranged from his entire family after he accused Jackson of molesting his son Jordan in 1992.
A 13-month police investigation cleared Jackson of any wrongdoing, but the singer, who died a year ago on Friday (25Jun10), later paid the teenager $22 million (£14.6 million) for "personal injuries arising out of claims of negligence" in return for dropping a civil suit against him.
Evan Chandler's body was found at his apartment in New Jersey last November (09) and officials ruled the death as suicide.
In her upcoming book, Never Can Say Goodbye: The Katherine Jackson Archives, the music matriarch writes that she "wants to believe" Chandler killed himself because of the pain he caused the Thriller hitmaker with his claims.
According to TMZ.com, Jackson writes, "Evan Chandler, the father of Michael's first accuser, recently committed suicide.
"Though I can't comment on why, I want to believe his conscience finally caught up with him and he was not able to live with himself after destroying an innocent person's career and breaking his spirit."