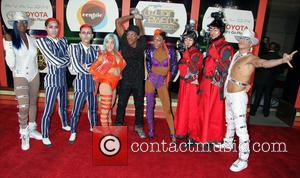 Michael Jackson's mother Katherine has filed an appeal challenging the ruling in her wrongful death lawsuit against AEG Live executives.

Last month (Oct13), a 12-person jury decided that although the concert promoters had hired Dr. Conrad Murray to serve as the singer's personal physician ahead of his doomed This Is It gigs, they were not liable for damages following the King of Pop's death as the medic was ruled not "unfit or incompetent to perform the work for which he was hired".

As a result AEG Live bosses avoided a multi-million compensation pay-out to Katherine Jackson and the superstar's three children, who claimed the promoters acted negligently by hiring Murray.

At the time, Katherine insisted she had no regrets about taking on AEG Live in court, and even met with jurors to discuss their decision as she weighed up her options for an appeal.

Now she has pressed ahead with the case by lodging legal papers in a Los Angeles court a bid to overturn the verdict, reports Tmz.com.

The Thriller hitmaker died after receiving a fatal dose of anaesthetic Propofol as he prepared for his gruelling This Is It shows. Murray was released from jail earlier this month (Nov13) after serving time for administering the drug.