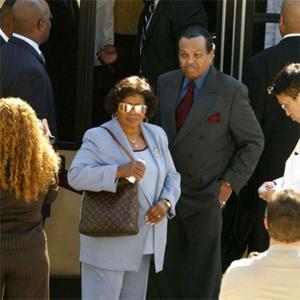 Michael Jackson's father is suing the late star's concert promoter over his death.

In documents filed to the California Medical Board, Joe Jackson accuses AEG Live - the company behind his 50-date 'This Is It' London residency - of engaging in the "unlawful practice of corporate medicine," alleging they paid the late 'Thriller' star's personal physician, Dr. Conrad Murray, to provide his client with dangerous medical services.

The complaint states: "AEG hired, directed, controlled and demanded Dr. Conrad Murray, a medical doctor, to medicate Michael Jackson, provide Jackson with dangerous medical services and to give Michael Jackson controlled substances and other drugs without providing cardiopulmonary resuscitation equipment or nursing assistance as it had promised in writing it would provide,"

It also alleges AEG Live failed to supply the medic - who has been charged with the involuntary manslaughter of Michael, who died of acute Propofol intoxication last June - with a nurse and other equipment.

In a proposed contract to the doctor - which was not finalised at the time of the singer's death - it is detailed what the medic would be provided with.

It stated: "AEG shall provide Dr. Murray for his use during the term with medical equipment requested by Dr. Murray to assist him in performing the services as approved by AEG."

In his filing, Joe alleges the cardiologist was to be paid vastly more than he was making so the concert promoters could exert control over his medical decisions, citing a 2008 income declaration in which the doctor stated he earned $3,300 a month.

Dr. Murray - who received none of his $150,000 monthly fee from AEG Live - has pleaded not guilty to involuntary manslaughter.

Joe is also said to be considering a wrongful death lawsuit against the medic.