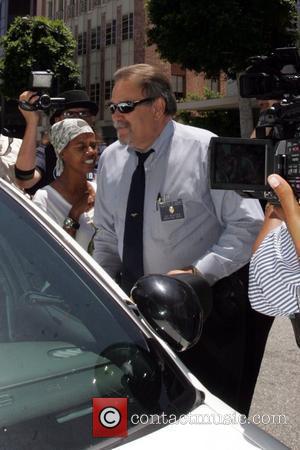 Picture: Los Angeles County Coroner Assistant Chief Ed Winter is surrounded by paprarzzi as he returns to his car after visiting a medical center, to obtain...

Michael Jackson's father Joe has denied he ever beat his superstar son as a child.
The Jackson family patriarch has long been accused of ruling the famous clan with an iron fist during his time as the Jackson 5's manager.
The late Thriller hitmaker spoke out about the alleged abuse at the hands of his father in several interviews, insisting he would "regurgitate" with fear of his dad
But in a new TV interview with America's Chris Connelly, Joe Jackson is adamant he didn't punish his children any more severely than other parents.
He tells the presenter, "Michael was never beat as they call it. And everyone spanked their kids when they did wrong. But not beat."
And Jackson insists it was his wife Katherine who handed out the spankings to their kids - as he was away on business most of the time.
He adds, "Katherine spanked Michael more than I did, 'cause I was working two jobs and she was at home with him the most."
And Joe insists he doesn't regret pushing his children into the limelight: "No. I don't have any regrets. Yeah, we brought him up the right way."