Jackson's Father Sues Over 'Forged' Will 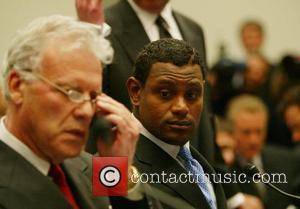 Picture: White-faced Sosa denies 'doing a Michael Jackson' Dominican Republic-born former baseball star Sammy Sosa has been forced to deny bleaching his skin, after he was...

Michael Jackson's father Joe has filed suit against the administrators of his late son's estate - alleging the superstar's will is a forgery.
The family patriarch recently launched a bid for a share of the King of Pop's fortune after he was excluded from the list of beneficiaries.
Jackson has now filed legal papers calling for estate executors John Branca and John MCClain to be disqualified, alleging they hid a mistake in the singer's 2002 will from the courts.
The estate was recently hit by claims of a possible forgery in the document, which was signed and dated "July 7th, 2002 at 5:00 pm, Los Angeles” - after pictures emerged of Jackson in New York on the day he reportedly put pen to paper in California.
Attorneys for Branca and MCClain subsequently insisted the will witnesses have confirmed Jackson himself signed the paperwork.
But Joe Jackson isn't convinced - his lawyer, Brian Oxman, tells CNN, "The executors have an obligation to tell the court the truth, the whole truth and nothing but the truth. But for four months they've been silent as to where this will was signed. They are concealing this from the court and you cannot do that."
The petition lists 11 grounds on which Jackson believes the pair should be dismissed as executors, accusing Branca of several conflicts of interest concerning his involvement in the estate.
But Branca and MCClain have hit back at Jackson's legal challenge. Their lawyer, Howard Weitzman, tells TMZ.com, "These claims filed by Joe Jackson are so outrageous that they don't deserve any response. John Branca and John MCClain, who were designated by Michael Jackson in his will as executors of his estate, will continue carrying out Michael's wishes for the benefit of his mother, his children and charities."