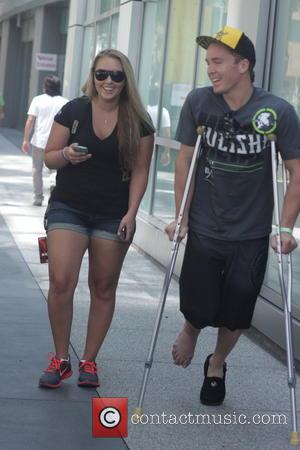 Michael Jackson's ex-wife Debbie Rowe broke down in tears during a taped interview for a U.S. Tv news show recently as she lashed out at those who let the King of Pop die.

The former nurse, who now helps to run a horse ranch in California, agreed to sit down and talk to Entertainment Tonight and she struggled to contain her emotions when she was asked for her thoughts about her former husband's 2009 drug-related death.

Rowe, who is the mother of Jackson's eldest kids Prince Michael and Paris, believes too many people turned their backs on Jackson when he needed their help as his drug dependency spiralled out of control.

Fighting back angry tears, she says, "All the people that claim to be so close to him, not one person tried to stop it... If I know something's wrong, I'm gonna try to stop it."

Rowe admits she would have liked someone to use the media to shine a light on Jackson's problems, adding, "There were more people involved that saw him falling apart. God forbid one of them take out a camera (sic)... and give it (footage) to someone like Entertainment Tonight and stop it. I think they were too selfish."

The former nurse admits she'll always have fond memories of her time with the King of Pop, adding, "He told me my life was gonna change and it did and he's taken such good care of me."

During the candid interview with the reclusive former Mrs. Jackson, which aired on Tv in America on Wednesday (06Nov13), Rowe also opened up about her relationship with her children's guardians, T.J. and family matriarch Katherine, insisting stories about them all not getting along are completely untrue.

She explains, "T.J. is an amazing man. He has an amazing family... I love Mrs. Jackson... We all may not care for her family... but she is my children's grandmother."