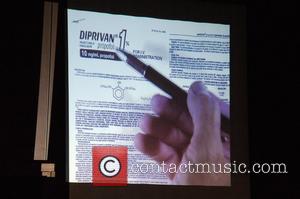 A top Beverly Hills child psychotherapist has urged the judge overseeing DR. Conrad Murray's involuntary manslaughter trial not to put Michael Jackson's teenage kids on the stand - if they're called to testify about their father's death.
As proceedings get underway again on Wednesday (19Oct11) after a two-day delay, reports suggest Jackson's eldest child, 14-year-old Prince, has met with prosecutors and pundits watching the trial suggest he may become a key witness.
On Tuesday (18Oct11), the boy's grandmother, Katherine Jackson, told CNN that Prince would not be testifying in court - and author and child expert Dr. Fran Walfish agrees it would be in the teenager's best interests not to come face to face with the physician accused of killing his father.
Walfish, the author of The Self-Aware Parent, says, "The kids have already suffered a life-shattering trauma and seen the worst. They saw their father die and lost the most important attachment figure in their lives."
But Walfish insists there is a compromise if Judge Michael Pastor sees fit to question Prince or his sister Paris about what they saw on the day their father died - he can set up a carefully considered meeting behind closed doors.
She adds, "When a minor child is involved in a court case it is the responsibility of the court to not exploit, but rather protect the psychological integrity of the child, as well as help the legal system.
"My recommendation to the court for the Jackson children is for the judge to have private discussions with the children in the presence of an expert child psychologist, not in the presence of the jury or television cameras.
"Let's stack the cards in favour of the best interests of the kids and, at the same time, allow them to have a voice in serving justice for their father."