'Love Never Felt So Good', the first single from Michael Jackson’s long awaited posthumous album, Xscape has been given its debut at the iHeart Radio awards. The single sees Justin Timberlake duet with Jackson on the track that he originally demoed in 1983. So now we've had a listen, what's the verdict? Has Jackson never felt so good or does he need to Xscape from Timberlake? 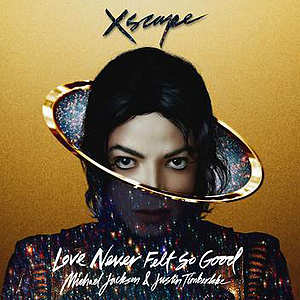 Firstly we can’t technically call ‘Love Never Felt So Good’ a new track. The song was written by Jackson with Paul Anka and originally demoed in 1983. Still this version has been updated and produced by John McCalin with some extra vocals added by Justin Timberlake, so it is pretty much 'new'.

Re-mastering and producing the material left behind by Michael Jackson is an unenviable task, just the slightest change to Jackson’s well known sound could incur the wrath of the King of Pop’s legion of fans. Luckily the first thing you notice when listening to ‘Love Never Felt So Good’ is that it’s unmistakably Jackson. Better than that, it’s vintage Jackson, and fits in perfectly with his early 80’s output from when it was originally recorded.

There’s also a definite Timberlake vibe to the single. The opening seconds are reminiscent of his FutureSex/LoveSounds days but then there’s a distinct ‘Don’t Stop Till You Get Enough’ feel as Jackson steps in. Timberlake has done well not to put too much of his stamp on the single and risk over powering Jackson. There’s just enough Justin here to make his contribution feel both warranted and worthy.

In its essence ‘Love Never Felt So Good’ is a feel good, upbeat, dance number. Jackson and Timberlake’s vocals blend well together, showcasing just how much Justin owes to Jackson as an artist. It’s well produced and musically layered enough to fit in with the rest of Jackson’s back catalogue. The King of Pop is also fantastically on form vocally, although his true range isn't on show, his soft vocals fit perfectly with the music and the overall feel of the song.

For Jackson fans ‘Love Never Felt So Good’ does a good job of staying loyal to Jackson whilst sounding contemporary enough to fit into the chart today. It’s not groundbreaking or an exceptional example of his artistry, but it gives a good indication that Xscape could serve as a fitting tribute to Jackson and his legacy. Although ‘Love Never Felt So Good’ doesn't offer that much in the way of newness for Jackson fans, it will hopefully transport them back in time with Jackson and remind them of why they love his music so much in the first place.

Listen to the track here!