Michael J. Fox Thrilled Back To The Future Fans On U.s. Tv On Wednesday Night (21oct15) By Showing Off A Pair Of Self-tying Nike Sneakers Like The Ones He Wore In The Movie. 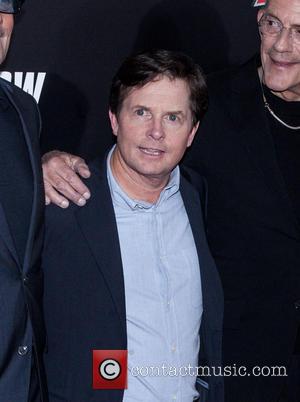 The actor was appearing on Jimmy Kimmel Live! on Back to the Future Day, which marks the date his character Marty MCFly time travelled to in 1989's Back to the Future II, and after wowing the host's studio audience in New York by hitting the stage in a DeLorean sports car, just like the one he used in the film, dressed as MCFly, he had another big surprise.

Nike bosses had created a pair of shoes just like the ones Fox wore as MCFly for him to wear on the show.

"They'll only be available by auction which will benefit our (Parkinson's Disease) foundation," he explained. "Mark Parker from Nike brought them today and they lace up."

The audience gasped, clapped and cheered as Fox, who suffers from Parkinson's, offered a demonstration, adding, "It's good being me."

During his in-character appearance at the top of the show, Fox appeared in a skit with Back to the Future co-star Christopher Lloyd, during which they appeared to be underwhelmed by their visit to the 'future', and disappointed that flying cars and hoverboards, like those featured in the 1989 film, had not been invented.

Rocker Huey Lewis, who sang the Back to the Future theme The Power of Love, also made an appearance, asking Lloyd, Fox and Kimmel to keep the noise down because they were being too loud.