Michael J. Fox Reunited With Christopher Lloyd And Lea Thompson On Wednesday (21oct15) To Join Fans In Celebrating Back To The Future Day. 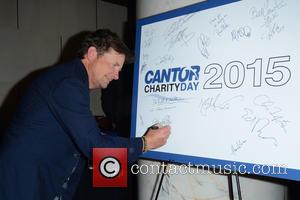 Wednesday's date is the same one Fox's character Marty MCFly time travelled to in 1989's Back to the Future Part II, and to mark the occasion, the co-stars gathered in New York City for a special interview on U.S. breakfast show Today.

Lloyd, who played zany scientist Doc Brown, made quite an entrance as he pulled up to Rockefeller Plaza in one of the film's classic DeLorean cars, and remained in character as he greeted waiting fans.

He admitted working with Fox had been a real joy as they immediately hit it off on the set of the original 1985 release.

"We had a chemistry from the instant that we walked on set," he said. "We were so happy to see each other. It never had to be manufactured, nobody had to say, 'Work for this kind of chemistry.' It was just there. It was innate. And wonderful."

Fox confessed he wasn't producers' first choice to play MCFly, and he was thrown in at the deep end when he signed on for the movie: "I came into the project late. There was another actor for nine weeks... It happened so fast. I kind of discovered it (chemistry) in the process of doing it. And I was like, 'Wow, these guys really know their stuff.' It was an amazing experience."

Fox, Lloyd and Thompson will continue the nostalgic celebrations later on Wednesday, when they will gather with the entire cast for a special screening of Back to the Future Part II at the Big Apple's Lincoln Center. The event will be the first time the whole gang has reunited since the sequel's 1989 premiere.