Michael Fassbender Vomited On By Fan

Michael Fassbender was left ''bemused'' when a fan vomited on his shoes in a London bar. 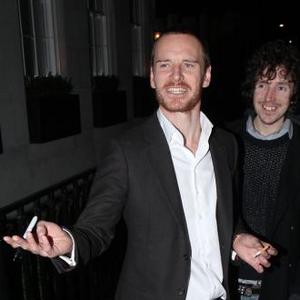 Michael Fassbender was left ''bemused'' when a fan vomited on him.

The 'Shame' actor reportedly ''played it cool'' when a star-struck woman got so excited at meeting him in a London bar, she threw up on his shoes.

A source told The Sun newspaper: ''Since Michael has been talking about how he lives in Hackney, east London, loads of girls have been hanging around the area in the hope of catching a glimpse of him.

''He was a bit bemused by his latest encounter and brushed off the vomit and played it cool.

''He used to be a barman so he's no stranger to mopping up some sick.''

This is not Michael's only recent night out when an incident has occurred.

At the end of January, the 34-year-old actor was in high spirits as he celebrated at Mayfair restaurant 34 following the London premiere of his latest film 'A Dangerous Method'.

But he was asked to leave after staff grew tired of his antics, which included wildly dancing with his co-stars Keira Knightley and Viggo Mortensen around the room, taking over the venue's piano and lighting up a cigarette inside.

Speaking about Michael - who was carried out of the party on his friend's back - a source said: ''Michael was politely asked to leave. He was in good spirits but it was becoming a bit of a handful for the other guests.

''He was grabbing his co-stars and waltzing around the room with them. He lit a cigarette indoors and that was the point it had gone too far.

''He's a great actor and women loved him in 'Shame'. It might have something to do with him having his wiener out for most of the movie.''