Michael Fassbender may be dating his 'Shame' co-star Nicole Beharie, after the pair were seen arm-in-arm out for a walk in New York. 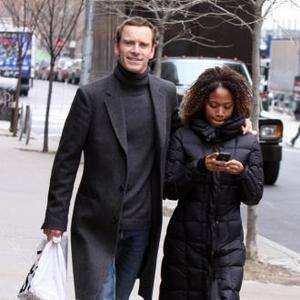 Michael Fassbender is thought to be dating his 'Shame' co-star Nicole Beharie.

The Irish/German actor - who currently lives in London - was seen arm-in-arm with the 27-year-old beauty in New York's Soho district.

The pair both starred in the critically acclaimed movie directed by Steve McQueen, but despite the film's subject being about Michael's character's sex addiction, Nicole's character was one of the only people he did not have sex with.

Michael and Nicole seemed happy in each other's company as they did some shopping, both dressed casually in training shoes.

However, the 34-year-old actor has previously revealed he has found it hard to maintain a relationship while balancing his hectic work schedule.

He said: ''To be honest, relationships as a whole for me in this industry have been a difficult thing to maintain.

''It goes with the territory. I would be prepared to walk away from relationships because of my job. I wanted to give this everything and go for it 110 per cent, so I guess my work has taken precedence over that.''