Macbeth stars Michael Fassbender and Marion Cotillard arrived in Cannes on Saturday, as the film premiered as the final competition entry to be screened before the festival prize is announced tomorrow. The film is now said to be one of the top contenders for the coveted Palme d'Or prize, after impressing the critics with its new take on Shakespeare’s classic work. 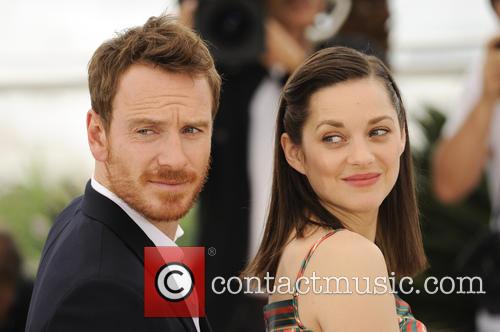 Michael Fassbender and Marion Cotillard at the premiere of Macbeth in Cannes.

Directed by Justin Kurzel, this Macbeth paints the Scottish warrior as suffering from post-traumatic stress disorder and dealing with a wife who’s haunted by the loss of their child. Michael Fassbender stars in the title role, while French actress Marion Cotillard stars as Lady Macbeth.

Speaking to the press on Saturday Fassbender said he gravitated towards the idea of Macbeth suffering from PTSD after Kurzel connected the King’s story to that of modern warfare. "That changed everything for me," Fassbender said.

"We know from soldiers today coming back from Iraq or Afghanistan that describe post-traumatic stress disorder and the fact that they have these hallucinations. They can be walking down the street here, the Croisette, and the next thing, it's Basra.”

Cotillard told the press she’d ‘never felt so much pressure tying to embody a character’ as when she tried to become the iconic Lady Macbeth "This is the first time in a film that I've found it difficult to slip into the character,” the actress said. “I've often played dramatic character but never perhaps to this extent. All the characters I've played so far were full of light or held out some hope, but in this case, all is gloom."

Both Cotillard and Fassbender have so far earned rave reviews for their performances from the notoriously harsh Cannes critics. “As Macbeth and Lady Macbeth, Michael Fassbender and Marion Cotillard are a dream-team pairing, actors who radiate charisma, perhaps more charisma than can be entirely absorbed into the fabric of the film,” wrote The Guardian’s Peter Bradshaw.

The Telegraph’s Robbie Collins praised the two stars even further writing, “After seeing Fassbender and Cotillard in these roles, the thought of ever seeing anyone else play them fades into irrelevance.”