Ahead Of US Release, Quirky Musical Comedy "Frank" Strikes The Right Chord With Critics

Though it only gets a limited release, the premiere of "Frank" looks promising.

This week, Lenny Abrahamson’s Frank came out of nowhere to great reviews and optimistic weekend predictions. It seems Michael Fassbender playing an eccentric musician, who hides behind an oversized plastic head when performing (and at most other times, actually). The character, Frank, is loosely based on 80s and 90s rocker Chris Sievey,  aka Frank Sidebottom. Surprisingly, the man with the oversized head is neither the protagonist, nor the narrator here. 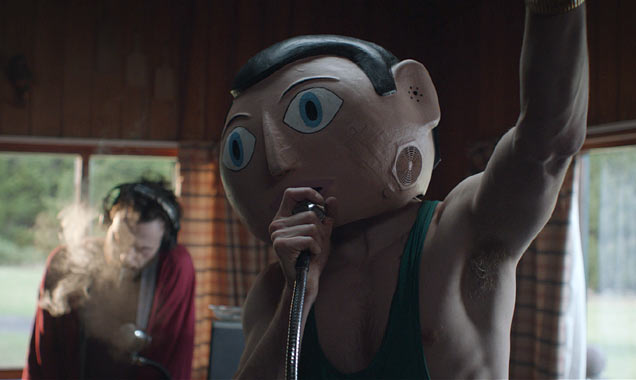 Frank is fast, quirky and only occasionally inappropriate.

Those duties fall to Jon (Domhnall Gleeson), an office worker with few pleasures and even fewer prospects in life, who harbors big dreams of rock stardom. In his spare time, Jon likes to wonder about town and write bad song lyrics in his head. At least that’s what he’s doing in the film’s very first scene, right before he meets the band, who are pretty busy trying to stop pianist Lukas from drowning himself in the ocean. It soon becomes clear that Frank and co. need a replacement bandmember immediately and – you can already tell where this is going – Jon is just the right man for the job. Yes, it’s that kind of movie. Inspired by the life and work of Frank Sidebottom, the movie adapts his story to a post-Youtube world.

So far, the movie has been praised for being a well-acted, well directed exploration of the people behind the music, etc. Said people – even mysterious, ridiculously peppy Frank – actually turn out to be a bunch of loners grasping to their music for comfort. So far, the dark, R-rated comedy has been called a “complex, but worthwhile, attempt at being facetious, satirical, and emotionally bare all at once” (NPR) and its story – “visually arresting” (USA Today). That said, it isn’t without its faults. As a portrayal of mental illness, it falters and frequently enters into insensitive territory – the jokes about suicide strike a particularly off-key note in an otherwise great tune.

Watch the trailer for Frank below:

Frank premieres in New York today and will get a limited US release from August 22.