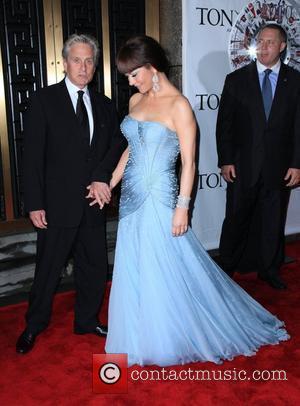 Michael Douglas is facing a legal battle over his pay cheque from the upcoming Wall Street sequel - his ex-wife has filed a lawsuit alleging she is owed a share of his salary.
The Hollywood star has reprised his role as greedy Gordon Gekko for a follow-up to the 1987 movie, Wall Street 2: Money Never Sleeps, which is due for release later this year (10).
But Douglas is facing a fight to keep hold of his payment for the film after his former partner, Diandra Douglas, who he divorced in 2000, filed papers demanding 50 per cent of his pay cheque and royalties from the new picture.
The lawsuit, filed in New York City earlier this month (Jun10), claims Diandra's divorce deal entitled her to half her ex-husband's earnings from projects he worked on during their 20 years of marriage - including the original Wall Street movie and any possible "spin-offs".
At a hearing in a Manhattan court on Wednesday (23Jun10), Diandra's lawyer Nancy Chemtob said, "It's the same character, the same title, just years later."
Douglas' attorney insisted the sequel is "not the same thing" as a "spin-off" and urged Judge Cooper to dismiss the lawsuit on the grounds that it should be heard in California, where the couple divorced in 2000, and because it has no merit, according to the New York Post.
The judge decided not to rule on the case until a decision is made on transferring it to the West Coast.