Michael Caine, Alan Arkin and Morgan Freeman talk about Going In Style and how to get laughs

To remake the 1979 caper comedy Going in Style, about three pensioners who turn to bank robbery to solve their financial problems, the filmmakers managed to collect three of the most venerable actors of our time: Oscar winners Michael Caine (84), Morgan Freeman (79) and Alan Arkin (83). And while the original film combined political awareness with a bittersweet tone, this one aims more for entertainment value.

"This has a social depth, but it doesn't play on it," Caine says. "We're not making a political message; it's just their financial situation. But it feels topical, very fresh. They've been robbed so they go out and steal the exact amount of their pension."

"The plan was, if they got more money than they were owed, then they would give it to charity," says Freeman. "They spread it around thinking everyone should get a piece of the pie."

Arkin sees this issue as a reflection of ageism in society. "It's another prejudice," he says. "In other cultures, they don't shove older people off to the corners. We're just people like anybody else!" But he also says that the issues remained under the surface while they made the movie. "Everyone wanted to have fun on set. And it was joyous!"

"But it was very hard work," Caine interjects. "Comedy is harder to do than drama. You can make anyone burst into tears, but trying to get a laugh is murder."

"We're not comedians," Freeman adds. "That's what he's trying to tell you! So being funny is not in our forte."

"We're playing real people who you think are funny, not people who think they are funny," Caine clarifies. "If you play a person who thinks he's funny, he's not funny. You see time and time again where people screw up like that playing comedy. You got to play a real person." 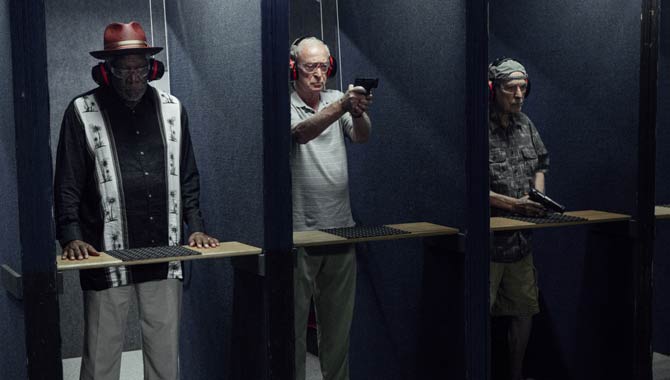 Freeman, Caine and Arkin at the shooting range

And Caine thinks the movie is for audiences of all ages. "It stars some really old people, but they're funny so you'll be able to go see it if you're not old," he laughs.

Freeman clarifies: "They're not really funny either. There's a touching side. Two of us have grandchildren that we love and one of us is just a hopeless curmudgeon," he says pointing to Arkin.

"It's everything you hoped to see," Arkin laughs. "Except sex and violence!"

At this point, their costar Ann-Margret pipes up. "Everyday this went on," she says. "Do you know how much fun it is to be the only girl with all these boys?"

Watch the trailer for Going In Style: