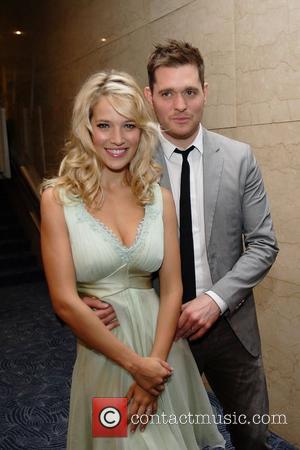 Michal Buble and his actress-and-model wife Luisana Lopilato have announced they are having a baby! The Canadian singer and Argentinian star chose to share the news by posting a video on her website early on Thursday (January 24, 2013).

The clip opened up with the words, "Mike, Lu and mini Buble!" before showing various shots of an ultrasound baby scan, with cheering in the background. "We are having a mini Buble!!!" came on the screen, again. The 37-year-old smooth-singing crooner has often spoken of his desire to become a father and the news will no doubt please fans of both stars, though some of Michael's ambitious female fans may just be feeling a little jealous today. Just a tiny bit? Anyway, the couple got pretty serious just months into their relationship, becoming engaged in November 2009 before tying the knot in Buenos Aires in 2011. Instead of taking to the skies for a lavish honeymoon, the couple opted to carry out charity work in Africa, instead.

Buble famously penned his hit track 'Haven't Met You Yet' for his wife-to-be, and Lopilato even starred in the music video. She remains one of the biggest stars in Argentina and on-top of her singing career has modelled for Ultimo, Coca-Cola, McDonalds, Gillette, L'Oreal and Blackberry.

Watch Michal Buble Singing 'Don't Get Around Much Anymore' With Tony Bennett: