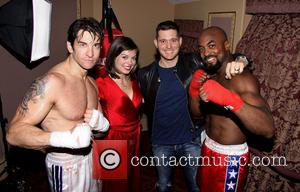 Posing with some of the cast members in their costumes, Buble made sure he got photos with actors Andy Karl ('Legally Blonde', '9 to 5', 'The Mystery of Edwin Drood'), Terence Archie ('The Elaborate Entrance of Chad Deity') and Margo Seibert ('Tamar of the River'), who play the roles of Rocky Balboa, Apollo Creed and Adrian respectively.

The stage rendition of the classic movie series has been produced by Sylvester Stallone, who starred as the original Rocky in the movies telling the tale of a loan shark collector who rises to fame as a world champion heavyweight fighter.

Buble was also snapped practicing his own boxing skills on a punchbag backstage - though we doubt he'll be up against the likes of Floyd Mayweather any time soon.