Mia Wasikowska only works on films where she will learn something and she wants to be ''inspired'' by the project. 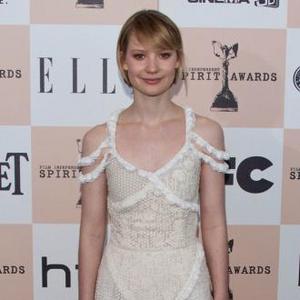 Mia Wasikowska only works on films where she will learn something.

The 'Lawless' actress wants to be ''inspired'' by her projects and is fascinated by the process of seeing a piece of work come to fruition, though she knows it requires ''luck and timing'' to get exactly the roles she wants.

She said: ''I get so much from watching more established actors rehearsing, and having the chance to see, with directors, how a script lives in the mind and how it changes when it's materialised and physical, with people.

''For me, it's about the projects. I only want to work if it's on something that's inspiring to me. I know that's a lot to ask and that you can't just say that and have it happen, but hopefully people will want to work with me in turn.

''So much of it is luck and timing anyway, and being in the right place at the right time.''

Mia feels ''grateful'' that her management team never pressure her or force her to do things that she has no interest in.

She told Britain's Vogue magazine: ''I have a great team around me but they know me very, very well so they don't try to force anything on me that doesn't fit.

''They're not trying to shape me into something that I'm not. It was always my choice to start acting and it's always been up to me. I guess I have just been really, really lucky. There's never been any pressure.''