Mia Wasikowska says she got ''hypothermia'' on the set of 'Jane Eyre' because the conditions were so cold and wet. 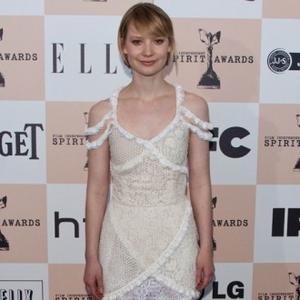 The Australian-born actress found acting in the cold climate of Derbyshire in Britain for the period drama was so physically challenging she became ill on the second day of shooting.

She said: "I remember precisely that, on day two, I got hypothermia, but it was okay. It was very, very cold. It was hard enough in regular clothes, let alone with fake rain and soggy period costumes."

The 21-year-old star added that although the environment in which was working was "bleak", she felt it helped her to portray the fear and loneliness her character teenage governess Jane feels.

She explained: "Yeah, it was very bleak. When you're in that environment, you really get a sense of the isolation and the distance between one estate and another.

"In our world, we have so many ways we can escape with technology, like TV, Facebook, computers, text messaging and all that. For her, it was reality, every day."

Mia also had a tough time with the uncomfortable period costumes she had to wear, but had to do it for the character.

She told Collider.com: "The wardrobe is always the last piece of the puzzle. When you step into the clothing, that's the final step to figuring out that character.

"I also like looking at a lot of pictures from the era, or if there is any footage. I always collect a bunch of images for every film that I do, that reminds me of an essence of the character, or the time that they live in, or what they're experiencing."

'Jane Eyre' is set for release this year.