Scroll for photos from the film set 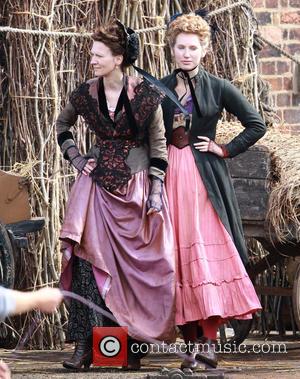 Pictures have emerged of Mia Wasikowska, Lindsay Duncan and Ed Speleers filming scenes for 'Alice in Wonderland: Through the Looking Glass' on location in Gloucester.

The on-set photos give a fascinating insight into the sequel to Tim Burton’s 2010 film. Johnny Depp, Anne Hathaway, Mia Wasikowska and Helena Bonham Carter are this time joined by Sacha Baron Cohen, in a film that is said to revisit Lewis Carroll’s stories with an “all-new new tale that travels back to Underland —and back in Time.”

Depp stars once again as The Mad Hatter in yet another chance for him to reinvigorate his career, which has plummeted since the critics panned movies like The Tourist, Lone Ranger and Transcendence. However, for Wasikowska, working with Depp was exactly what she thought it would be: like working with a legendary actor

“[Johnny] is everything you expect him to be. 'He's cool, he's kind, funny and very down to earth,” she explained to Metro. “Johnny's character [the Mad Hatter] is itself unpredictable but you can never be sure what you’ll get in a scene with Johnny. Working with him was like an acting school in itself.”

Bobin, who most recently helmed ‘The Muppets: Most Wanted’ has the incredible task of following Tim Burton, an unenviable task for any director. Although, with a lukewarm response from the critics – 56% on Rotten Tomatoes - he might feel more at ease. The intimidating part of the job is attempting to match the $1b it grossed from the worldwide box office. No pressure.

More: 'Maps To The Stars': The Movie That Took 20 Years To Write [Trailer + Pictures]