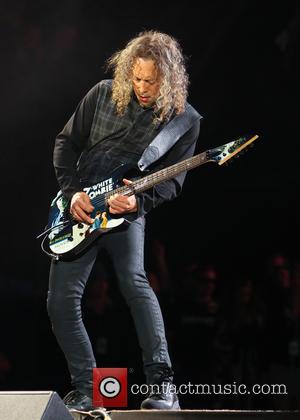 The rocker has confirmed the story many rock fans believed was just a myth in his new autobiography, I'm The Man: The Story Of That Guy From Anthrax, revealing he's glad the bandmates changed their mind.

Ian claims late Metallica bassist Cliff Burton alerted him to the news the drummer was close to losing his gig with the group during a chat backstage at a tour stop.

The Anthrax star tells Colorado radio station 94.3 Kilo, "They had made a plan that they were gonna make a change and get a new drummer. We were all kind of blown away by that, because it was the four of them. It was just, like, 'Wow! Really?' And they were, like, 'Yeah. When we finish this tour, we're gonna find a new drummer'.

"What could I do? Just as a guy who was friends with all of them, you feel, 'That's a bummer for Lars. That sucks'. And, at the same time, you hope that your friends can continue on and do what they wanna do with themselves.

"Obviously, history turned out differently for Metallica and they went on to become, arguably, one of the biggest bands on the planet. So I'm just glad it all... worked out for my friends.

"I honestly think it wouldn't have happened... I've thought about it quite a bit over the years. I honestly think that the tour would have finished and I think cooler heads would have prevailed, maybe, and I don't think the change would have taken place. That's what I believe."