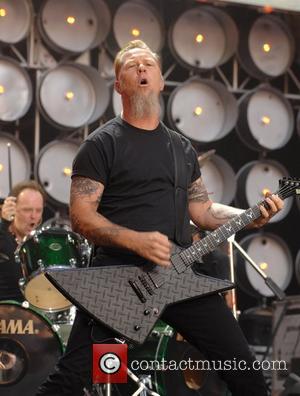 Metallica's Lars Ulrich pulled out of a major British rock festival last year (04) after suffering a mental collapse in a plane on the way to the event.

Two drummers - Slayer's DAVE LOMBARDO and Slipknot's JOEY JORDISON - filled in for Ulrich when he was unable to appear at the Download Festival in England in June 2004.

Ulrich blames his non-appearance on exhaustion, caused by an unrelenting tour schedule and the break-up of his seven-year marriage to SKYLAR SATENSTEIN.

The 41-year-old Dane says, "We'd had a heavy touring schedule in Japan, Europe, America and Australia. In the midst of that there were things that had come unravelled in my personal life - my family and my marriage and stuff. I'd had a lot of late nights and early mornings.

"So I woke up in Copenhagen (Denmark) on the Sunday morning, had brunch with 14 in-laws and cousins and then I got on the plane. I was exhausted.

"We took off, and about halfway over to Midlands Airport (in England)... I don't know what the f**k happened, but all of a sudden I just f**king lost it.

"It was pretty f**king scary to be in a little f**king metal tube at 41,000 feet. I've never had anxiety attacks of any kind of stress attacks ever.

"So we landed in Hamburg (Germany) and went to the hospital. They took some blood tests and everything was normal physically - it was just everything caught up with me mentally."

"It was the first ever Metallica gig I'd ever missed.

"You wanna try laying in a hospital in Germany while Dave Lombardo - the greatest drummer on the planet - is playing with your band. That's not easy. Joey Jordison, too.

"I have a bit of an odd relationship with it - I still haven't looked at the press or the pictures."