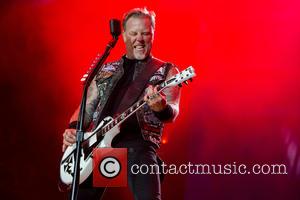 After arriving onstage to music and footage from the classic Western movie The Good, The Bad and The Ugly, the rockers opened with Fuel while 40 fans danced in a huge pen onstage.

Frontman James Hetfield told the crowd, "We are Metallica, and this is what we do!"

After an energetic set, which also included fan favourites For Whom The Bell Tolls and The Memory Remains, the rockers kicked off an encore with Whiskey in the Jar, which was dedicated to bandmember Burton, who was killed in a tour bus crash in 1986.

Metallica are due to headline the event's sister festival in Leeds, England on Sunday (30Aug15), while The Libertines will close the bill in Reading.