Heavy Metal band Metallica are fans of Justin Bieber after he was filmed backstage humming to one of their songs. 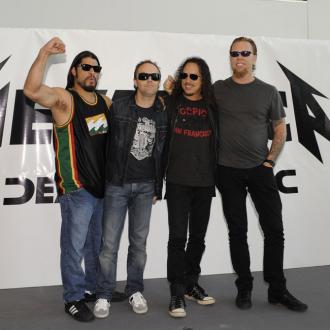 The 'Sad But True' heavy metal legends are impressed by 19-year-old teen heartthrob Justin Bieber - whose fans are affectionately referred to as Beliebers - after he said their tracks 'One' and 'Fade to Black' are his ''jams''.

Drummer Lars Ulrich added: ''Is it possible to have respect for him without being a Belieber? I think the kid's really talented and obviously to go through what he's going through at that early age must be a mind***k. So the fact that he still goes out there and does it, I admire that and I think he's super talented, so I guess I am kind of a Belieber. If he likes 'One', and Liam Gallagher likes him, OK, there you go.''

Justin was recently filmed backstage at a concert humming the guitar solo to 'Fade to Black' while playing air guitar, accompanied by backing musician Dan Kanter.

Beady Eye singer Liam declared himself a Belieber after Justin came on stage two hours late for a concert in London.

He said: ''I've got his f***ing back, man. Anyone who goes on two hours late is fucking right in my book.