Metallica And The Big 4 Open Soniphere 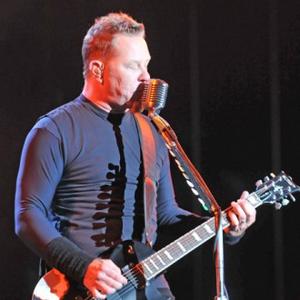 Metallica, Slayer, MEGADETH and Anthrax appeared on stage together in England last night (08.07.11).

The 'Big 4' of heavy metal joined forces at the Sonisphere festival in Knebworth, Southern England, to play a cover of Diamond Head's 'Am I Evil' - the first time members of all four groups had performed in England together.

The day had started earlier with Anthrax playing a set, followed by Megadeth â which includes ex-Metallica guitarist Dave Mustaine â before Slayer took to the stage.

Stand in guitarist Gary Holt of Exodus replaced Jeff Hanneman, who is recovering from a rare flesh eating disease sustained after being bitten by a spider.

Metallica then took to the stage to close the night, opening with 'Hit The Lights', the opening track from their 1983 debut album 'Kill 'em All'.

Their set leaned heavily on material from their early albums, with the band playing only two tracks â 'All Nightmare Long' and 'The Memory Remains' from their last four studio albums.

The band's 18 song performance included five of the eight tracks from their second album, 1984's 'Ride the Lightning', including "For Whom the Bell Tolls' and instrumental 'The Call of Ktulu'.

After closing the main set with their biggest hit, 'Enter Sandman', frontman James Hetfield invited members of the other groups to play 'Am I Evil'.

He said: "Celebrating 30 years of Metallica, we invite Slayer, Anthrax, Megadeth and hopefully someone from Diamond Head to put the cherry on top."

Metallica then closed the night with a second encore of 'Battery' followed by 'Creeping Death'.

Sonisphere festival continues tonight (09.07.11) with headliners Biffy Clyro, and will be closed by Slipknot on Sunday (10.07.11).

'The Call Of Ktulu'

'For Whom The Bell Tolls'