The cast and crew of the upcoming movie have posed together for the first time to celebrate International Women's Day.

The photograph, taken by Brigitte Lacombe is the first time the stars of the upcoming movie have posed together. In the film, Oscar winner Streep stars as political activist Pankhurst who paved the way for women to get the vote in Britain and led support for the war effort during the First World War.

Speaking about Pankhurst and the Suffragette movement Streep commented, “Every daughter should know this history, every son write it on his own heart." The actress along with her co-stars have been spotted around London filming for the movie in famous locations such as Holloway Prison and The Houses of Parliament, which was the scene of a grand protest in 1908.

The movie is the first commercial film in history to be allowed to use The Houses of Parliament as a location, something which director Sarah Gavron is very grateful for. “Our film is inspired by the true stories of the foot soldiers of the Suffragette movement, women who were willing to sacrifice everything in their fight for the right to vote,” Gavron told the BBC. 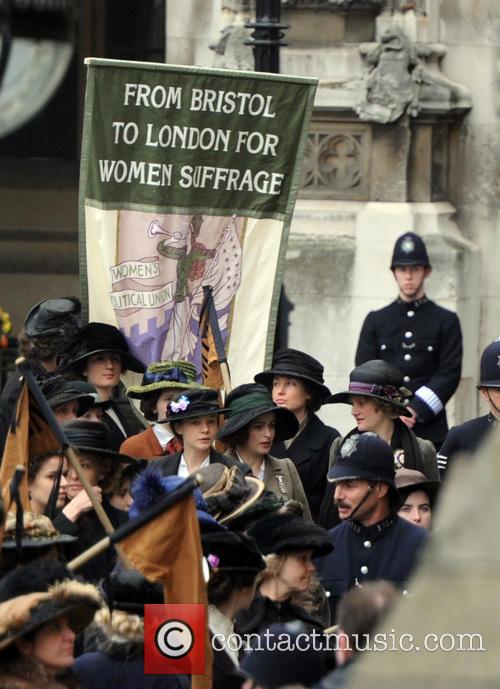 “We are honoured to be allowed to recreate a crucial moment in that long journey towards equality by filming where the Suffragettes actually brought their protest over 100 years ago.”

Speaking about this year’s International Women’s Day, the theme of which is 'Make it Happen' Gavron also said, “International Women's Day celebrates the achievements of women throughout the world and I am overjoyed that my film can be part of that celebration.”

More: 'Suffragette' Is First Movie To Shoot At Houses Of Parliament [Pictures]

“The story of the ordinary British women who were willing to sacrifice everything in their fight for the right to vote is an inspiration to all of us in our ongoing fight for equality.” Suffragette will hit UK theatres on September 11th.