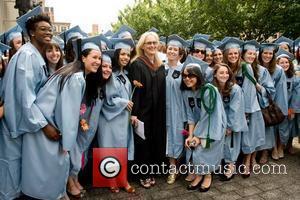 Meryl Streep joined in the celebrations at Emily Blunt's recent wedding by teaming up with the bride and groom's mums to sing Abba songs.
Blunt tied the knot with actor John Krasinski in a lavish ceremony earlier this month (Jul10) in the grounds of George Clooney's Lake Como villa in Italy.
Clooney, who directed Krasinski in Leatherheads, hosted the reception, which the happy couple shared with stars including Matt Damon, Bill Nighy and Blunt's The Devil Wears Prada co-star Streep.
And Streep wasn't afraid to let loose at the party on a cruise around Lake Como, bonding with both Blunt and Krasinski's mums.
A source tells Britain's Daily Express, "On board they were playing ABBA songs and Meryl volunteered to sing along with Joanna, Emily's mum, and John's mother Mary Clare to the song Mamma Mia! She had her arms around them belting out the songs."