Meryl Streep Learns A New Skill For Ricki And The Flash

The award-winning star got to have music lessons from a rock legend.

At age 66, Meryl Streep continues to add to her bag of acting tricks. For her role as an ageing rocker in Ricki and the Flash, she took a crash course in guitar playing from none other than rock legend Neil Young. 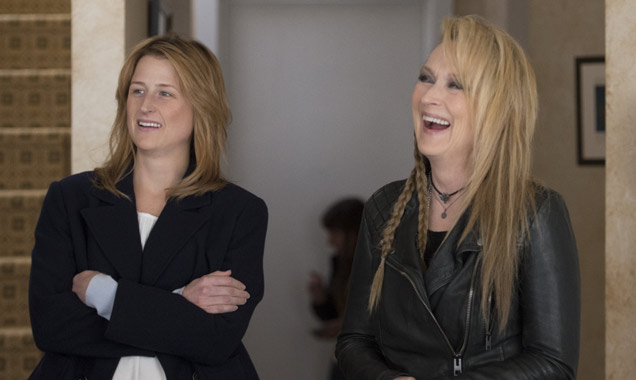 Ricki and the Flash director Jonathan Demme has made a series of documentaries about Young. "So Jonathan says, 'Come by, Neil would love to meet you, and maybe I'll get him to give you a guitar lesson,'" she recounts. "So my first lesson was 45 minutes with Neil. He is amazing. It's cool! I didn't know how to play guitar. I have been singing for a long time, but not really rock 'n' roll, because nobody asked me to."

Watch the trailer for 'Ricki and the Flash' here:

The film also gave her a chance to act alongside her real-life daughter Mamie Gummer, who plays Ricki's daughter in the film. They previously appeared together in Heartburn, when Gummer was just 20 months old. And in Evening, Gummer played the young Streep in flashbacks. But this was the first time they faced off dramatically opposite each other.

Streep says it wasn't difficult to argue with her 32-year-old daughter for the movie. "Well, we've been doing that for 30-something years," Streep says with a smirk before adding, "As an actor she's brave and fearless and funny and free."

And Gummer loved it too. "There's this one scene where I really was quite eviscerating, and I was worried about if my words actually wounded her," she says. "But after the first take, I looked over and she just had this big grin on her face."

More: Listen to 'Drift Away' from the 'Ricki and the Flash' soundtrack