Meryl Streep and her daughter Mamie Gummer have lifted the lid on what it was like to work together on the set of their new film 'Ricki and the Flash'. 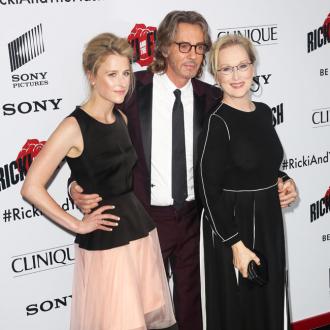 Meryl Streep has applauded her daughter for being the ''real deal'' in their new movie 'Ricki and the Flash'.

The 66-year-old actress plays the lead role as a retired rock star (Ricki) who returns home to build bridges with her children, one of whom is the troubled Julie depicted by Meryl's real life daughter Mamie Gummer.

Speaking at the world premiere of the film - which also stars Rick Springfield and Kevin Kline - in New York City on Monday (03.08.15), the Oscar-winning star confessed she was in awe of her daughter's performance.

Meryl - who has three other children with her husband Don Gummer - said: ''She's brave and fearless and funny and free. She's a free talent. It doesn't have any cover-up - she's the real deal.''

Mamie - who donated her boots to her mother to wear in scenes to play Ricki - has also opened up about what it was like to work with her mother.

The 32-year-old actress was ''worried'' she would upset her mother during some of the film's more tense scenes.

Mamie said: ''There's this one scene where I really was quite eviscerating and I was worried about if my words actually wounded her, but after the first take, I looked over and she just had this big grin on her face, so that was a pleasant surprise. Luckily my co-star, she knows how to do that quite well!''