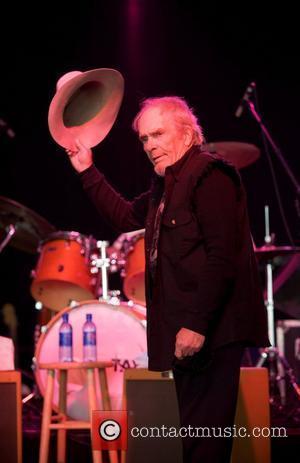 Country star Merle Haggard feared his cancer had returned when he was treated for pneumonia earlier this year (12), revealing he spent the first few hours in hospital "saying goodbye" to his family.
The 75 year old was diagnosed with lung cancer in May, 2008 and he subsequently underwent surgery to remove a part of his respiratory organ in a bid to beat the disease.
The Okie from Muskogee singer was later given a bill of clean health, but, when he was admitted to a Georgia medical centre with an unknown ailment in January (12), the icon admits doctors suspected the worst.
During an interview with U.S. breakfast show Today on Monday (28May12), he said, "The first day in the hospital they (the doctors) thought my cancer had returned. So for about the first 30 hours I was saying goodbye."
After several tests, medics discovered Haggard was suffering with a bout of double-pneumonia. He was treated for the ailment and discharged within a few weeks after making a full recovery.

Merle Haggard Back In Hospital