The Scottish trio edged out eleven other nominees, including Damon Albarn and FKA twigs, to win the grand prize.

Scottish trio Young Fathers have won this year’s Mercury Music Prize. Their debut album DEAD received the final nod from the judges when the announcement was made by Nick Grimshaw at London’s iconic Roundhouse venue on Wednesday evening. 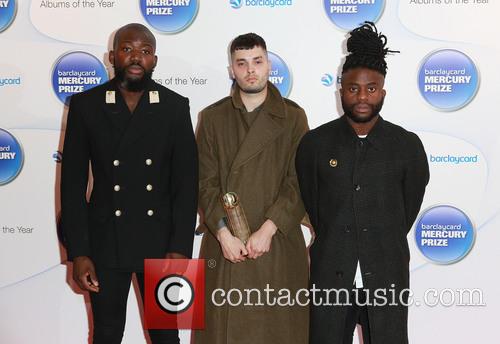 When the group was interviewed by More4’s Alice Levine a matter of seconds after scooping the prize, the members sounded rather shocked and lost for words, stating “it’s positive”. Their acceptance speech was similarly abrupt, simply saying “thank you, we love you, we love you all, thank you”. When asked what they intended to do with their £20,000 prize, the group’s ‘G’ Hastings implied that they hadn’t really considered the eventuality of winning it.

More: The shortlisted nominees for the 2014 Mercury Music Prize

Earlier in the day, bookies had FKA twigs and Kate Tempest as the favourites to win, with East India Youth in with a dark-horse shout, so Young Fathers’ victory looks to have upset the odds with only a 12/1 shot right before the announcement. Last year, James Blake’s Overgrown won in similar fashion.

Young Fathers join the likes of Arctic Monkeys, Franz Ferdinand, The xx and PJ Harvey in taking the prestigious Prize. 220 eligible albums were up for consideration by the music critics who make up the Mercury judges panel, and these were whittled down to twelve ‘Albums of the Year’ back in September. The first prize was held in 1992, which was won by Primal Scream’s Screamadelica.

As a result of their victory, Young Fathers will certainly see a jump in sales as well as increased touring opportunities and media attention. Their brand of socially conscious ‘alternative hip-hop’ has defied accurate description since DEAD was released back in early February. They have also self-released two mixtapes, Tape One in 2011 and Tape Two last year.

An extended program of highlights, including performances from all the nominees, is broadcast at 11:40pm on Channel 4 on Friday 31st October.