Leeds five-piece Menace Beach are the subject of a whole lot of hype, with appearance on BBC, The Guardian and NME on the back of their first album Ratworld, which showcased an interesting mix of indie and, strangely for a combo from Yorkshire, surf rock. Their second LP, Lemon Memory (limited edition vinyl comes pressed on lemon scented yellow wax) brings more of the same formula.

The album kicks off with a few abortive guitar stabs before Give Blood really gets going. This is a sludgy 2 chord lumbering riff monster of a tune. The structure of the song is incredibly pop-based, but the instrumentation lends a depth and grit to proceedings: the guitars wail, the drums are huge and it is all topped by an undeniable Yorkshire drawl. So far, so good.

Next up is recent single Maybe We'll Drown, which adds spooky keys to the garage rock recipe. The rhythm section creates some interesting atmospheres but the simplistic, repetitive melodies become somewhat grating over the song's length. It is a little dodgy, but definitely not the worst thing on here. That accolade goes to either the plodding, directionless title track, or the stupid, insipid Can't Get a Haircut, which could be one of the most bizarre (yet strangely characterless) songs ever put to tape.

By Andy Peterson in Music Reviews on 02 October 2015

The thing about bubblegum is, it's ace. Does bubblegum take itself too seriously? No. Can you mess it around into all kinds of different shapes, then when you get bored immediately change it again? Of course. Finally, can it be used to underline your stereotypical outward signs of juvenile delinquency? Well, allow us to blow you a great big splatty bubble now. 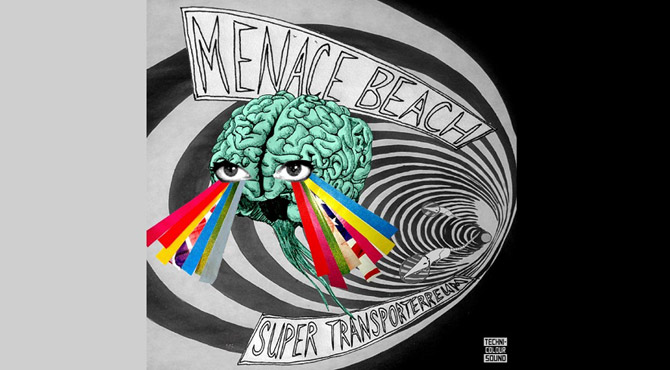 From Leeds - the city seems presently to have a conveyor belt of groovy, off kilter bands to jive to - Menace Beach arrived at the beginning of 2015 with the release of their debut album 'Ratworld', a feast of snarky, riot-grrrl pop-punk which was long on eyeliner and glamorous trash.  Not exactly hot on its heels but still kinda warm anyway, 'Super Transporterreum''s five new songs don't stray too much from the formula, but offer more proof that their mid-Atlantic retro drawl has legs up to its armpits.

Prisoners are not taken. The title track - so named after singer Liza's trippy case of flu and described by the collective as "Three bass guitars simultaneously doing a Bryan May riff" - is a foot stomping, Blondie as an x-ray mass of squawking overload, 'Beacher Ryan Needham turning the vocal ambivalence up to 11. If critics were being critical, there is an air of cookie cutting indie schmindie-ness to it, but with Hookworms prophetical MJ again on production duties the other ditties manage to avoid typecasting themselves. On 'Hey Toupe' for instance the addition of some psychedelic keyboard flourishes zap things pleasingly in and out of focus, whilst 'The Line' swaggers and 'Radiate Me''s peaks and fuzz will annoy the crap out of your parents/neighbours/schoolfriends for days.

By Andy Peterson in Music Reviews on 13 January 2015

A close inspection of the departure boards of Leeds airport reveals that flights to America are hard to come by: the only destination served is New York, and even then infrequently compared to some of the more metropolitan hubs. This doesn't help explain why Menace Beach - who are from the West Yorkshire city via Derby - sound like they've been gorging on Riot Grrrl mavens Bikini Kill, or glugging up the lo-fi of fellow Yanks Le Tigre. 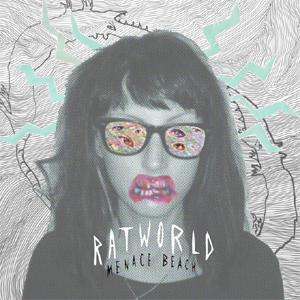 Not that the regular Beachers - guitarist/keyboardist Liza Violet and singer Ryan Needham - sound  like they care, as much of 'Ratworld' is held together by curled-lip spunk and basement rifferola that belongs as much to Burley Park as it does to it's less famous counterpart, Central. Produced by fellow Loiner-maverick Hookworms supremo MJ (who also plays, along with members of Sky Larkin and Pulled Apart By Horses) their resolutely DIY aesthetic in the wrong hands could be a minefield of derivation, but to everyone's credit they manage to bottle enough psy-kookiness in the thirteen tracks here to hold even the most wayward of attentions.

Even better, when 'Ratworld''s good, it's groovy-good; the feedback squawls and scribbled guitar crests of 'Lowtalkin'' are genuinely malign, whilst opener 'Come On Give Up' is a slacker anthem in the making, from its low slung chug-riffing to slightly dipsy chorus, dissolute chops and fuzz a go-go. The duo share vocal duties, with Needham's slightly less buzzing pipes taking over on the likes of 'Tastes Like Medicine' and 'Dig It Up', the latter a superbly woozy, weird and wonderful head screw up that underlines the raging pop beast that constantly prowls just under the surface of their best work.

Having been seriously thrilling their respective fans with a series of EPs since they got together in 2012, Leeds rock supergroup Menace Beach are finally on their way with a debut album. With members including Ryan Needham of Komakino, Liza Violet of Department M,  Nestor Matthews of Sky Larkin,  MJ of Hookworms and Matt Spalding of You Animals, it's no wonder their new co-project has caused such a stir, and with taster single 'Tennis Court' out now, the album may not disappoint. 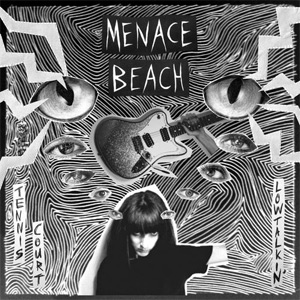 The first impression you get when listening to 'Tennis Court' is that this is standard indie-rock; the simple but groovy low-fi riff makes the likes of Dinosaur Jr. and Sonic Youth spring to mind. For the most part, the song just lightly drifts along as you nod along with it, but it throws in a few bursts of unexpected scratchy feedback and a wiry keyboard solo. The chorus is pleasantly catchy with the childishly sung, 'I'm a tennis court with nothing in it, you can rent a car, but I can win it' hookline. The lyrics don't make a lot of sense necessarily, but they're fun to sing along to in a 'doesn't have to mean anything' sort of way.

While 'Tennis Court' is far from ground breaking, it's a solid, enjoyable 2-3 minutes of indie-rock that you'll really like if you're into the classic 90s branch of the genre.