X-Men star James Marsden would love to pursue his dream of performing on Broadway - but fears his nerves would get the better of him.
The actor admits treading the boards in New York's famous theatre district is on his list of career goals, but he's too anxious to tackle the feat.
He says, "I would love to do Broadway eventually but I'm absolutely terrified of it. Anything live is hard enough. But it's the flying without a net thing that scares me. If I do it I'd love to do something off, off, off Broadway! For three people!" 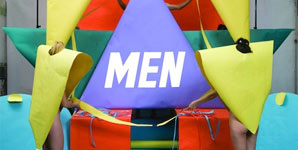