Canadian duo Memoryhouse are reissuing their debut EP 'The Years', which was self-released in February 2010. The EP is being marketed as 'an expanded and improved reissue' and will be entirely re-recorded, re-mastered and remixed with an additional two tracks added: 'Modern Normal' and 'Quiet America'. The re-release also marks the first time the EP has been released in a physical format. 'The Years' will be released on September 13th, 2011, through Seattle based label, Sub Pop Records, famed for discovering Nirvana and Soundgarden.

The video for Quiet America was directed one half of Memoryhouse, vocalist Denise Nouvion and sees her standing on a jetty at sunset, looking off into the distance. The video is dreamy and hypnotic and together with Nouvion's vocals is sure to send shivers down your spine.

Along with Denise Nouvion, Memoryhouse also consists of composer Evan Abeele. Prior to signing to Sub Pop, the duo have released two singles on two separate labels: 'Lately' and 'Caregiver' on 'Inflated Records' and 'Suicide Squeeze Records', respectively. Upon its initial release, 'The Years' received critical acclaim from blogs such as AOL Spinner and Pitchfork, among others. For the re-release, 'The Years' was mixed and re-recorded by Abeele and Daniel Gray. Memoryhouse are also set to tour in the US and will perform at the 2011 CMJ Music Marathon Festival in New York in October, whose past acts include the Black Eyed Peas, R.E.M., Eminem and Arcade Fire. 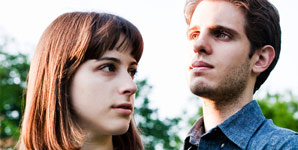