By The Sea Review

For their first on-screen partnership since Mr & Mrs Smith a decade ago, Brad Pitt and Angelina Jolie team up for this period drama about a strained marriage, written and directed by Mrs Jolie Pitt herself. It's made on a lavish scale, with achingly beautiful locations and costumes, plus references to classics from Plein Soleil to Who's Afraid of Virginia Woolf. But none of that can hide the fact that this is a stilted, contrived movie about two loathsome people we wouldn't want to spend five minutes with, let alone two very long hours. 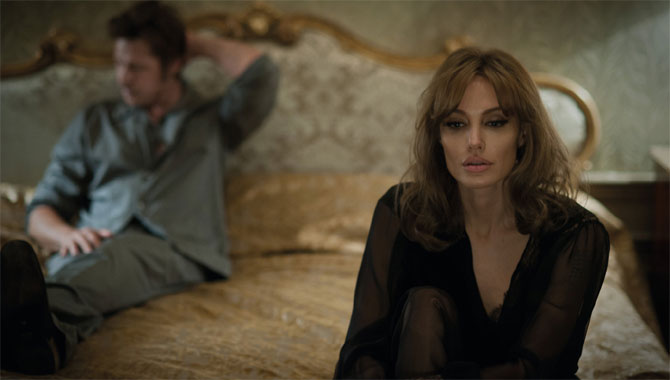 It's the mid-1970s on the Mediterranean coast in southern France, and Americans Roland and Vanessa (Pitt and Jolie) descend into an isolated cove for a getaway to rescue their collapsing relationship. A novelist, Roland is also trying to snap out of writer's block, so he explores local village and chats with cafe owner Michel (Niels Arestrup) for inspiration. Meanwhile, Vanessa prowls around their vast suite in a grand villa perched on the edge of the sea, latching onto the newlywed couple (Melvil Poupaud and Melanie Laurent) in the room next door. But something deeply damaging has happened between Roland and Vanessa, and spying on this couple through a hole in the wall only offers a vague sense of mutual gratification. What they really need to do is confront the elephant in their own room.

Pitt and Jolie always seem aware that a camera is on them, striking poses and blurting their dialogue in ways that never feel remotely honest. Their simplistic reactions to whatever happened in their past (Roland's booze and Vanessa's rage) are never properly explored, so the characters wind up being utterly superficial. And this leaves everything from their big mood swings to their moments of quiet tenderness feeling rather pointless. By contrast, the French actors invest an easy authenticity to their much smaller roles, grounding the setting with an earthiness that only makes Roland and Vanessa look even more alien.

Continue reading: By The Sea Review

It's the 1970s and Roland and Vanessa are an outwardly respectable married couple, struggling to find common ground with each other. While the latter used to be a dancer, the former is now a writer, and while the pair clash continually they decide to venture to France together in the hopes of rebuilding their relationship and saving their marriage. The stay at a beautiful and luxurious seaside resort and find themselves inextricably bonding with a local couple named Lea and François who are just married, and two other eccentric resident business owners called Michel and Patrice. But with accusations of infidelity plaguing their lives, struggles with mental instability on both parts and even violent altercations happening almost daily, can their marriage really be saved by their newfound friends and a glorious sea view?

Continue: By The Sea - Teaser Trailer

After I Killed My Mother and Heartbeats, 23-year-old filmmaker Dolan gets even more ambitious with this epic-length romantic drama. Not all of his flourishes work, and the film is far too long, but there are moments of artistic genius all the way through that make it worth seeing. It's also anchored by two terrific central performances that work their way under our skin. 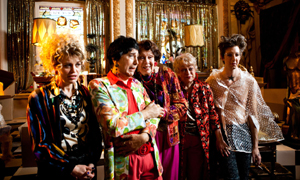 At the centre is the free-spirited relationship between Laurence (Poupaud) and his long-time girlfriend Fred (Clement). But Fred is caught completely off-guard when Laurence tells her that he has always felt like he was a man in a woman's body, and now he wants to start the transition to become female. She initially rejects him, but realises that she still loves him, regardless of his gender. His mother (Baye) takes longer to come round. And for Laurence the treatment from his colleagues and society at large is even more difficult to cope with, as he's the brunt of rampant bigotry. Over the course of a decade, his relationship with Fred is stretched to the breaking point, and after a few years apart they meet up again to see if they still belong together.

Poupaud and Clement deliver startlingly naturalistic performances as Laurence and Fred, letting us see into their souls as they face secrets, betrayals, outside pressure and the continual feeling that they belong together. Intriguingly, all of this unfurls in a way that's completely organic, as Dolan grounds everything in real human emotions. In fact, the only complaint is that the film feels artistically indulgent, and could have used a stronger editor to shape the story into a leaner, less rambling narrative.

A Week In Movies Featuring: Star Wars, Gambit, Hitchcock, Movie 43, Now You See Me And Much More!

The big movie news this week was that Disney has signed Lawrence Kasdan to return to the franchise to write Star Wars Episode VIII. He cowrote both The Empire Strikes Back and Return of the Jedi some 30 years ago. Michael Arndt (Toy Story 3) is writing Episode VII, and Simon Kinberg (X-men: First Class) is working on Episode XIX.

While rumour has it that Harrison Ford, Carrie Fisher and Mark Hamill will all be back for the new Star Wars movies, it's unlikely that Ewan McGregor will appear in them. But he was on hand this week for the London premiere of The Impossible, a true drama about the 2004 Indian Ocean tsunami by Spanish filmmaker J.A. Bayona (The Orphanage). Bayona and McGregor were joined on the red carpet and a screening Q&A by costar Naomi Watts.

Two big British films open in the UK this weekend. The remake of the con-artist comedy Gambit sees Colin Firth and Cameron Diaz take on roles originally played by Michael Caine and Shirley MacLaine in 1966. And David Tennant joins Marc Wootton for Nativity 2: Danger in the Manger, the sequel to 2009's hit comedy Nativity! Yes, it's just as stupid as the first film, but it's also a holiday guilty pleasure.

Continue reading: A Week In Movies Featuring: Star Wars, Gambit, Hitchcock, Movie 43, Now You See Me And Much More!

Laurence and his girlfriend Fred couldn't ask for a more special relationship. They spend as much time as they have together and are as passionately in love with each other as they were when they met 10 years ago. Although tempers flare occasionally, the couple are dependent on one another and do everything within their power to disassociate themselves with other people, despite the fact that Laurence is constantly around others in his career as a teacher and writer. However, things aren't as perfect as they could be for Laurence. He has a secret that he hoped would be forgotten once he met Fred; he longs to be a woman. When he breaks down and confesses his feelings to Fred, she is initially shocked but agrees to try and make it work. When Laurence starts dressing as a woman, things are not straight forward and the prejudices of society cause him to be shunned in his career, criticised by his parents and beaten up in the street. Fred is also having second thoughts - can she maintain their troubled relationship even with the constant worry and societal pressure?

This hard-hitting French romance is one of the most mature storylines director and writer Xavier Dolan ('I Killed My Mother', 'Heartbeats') has ever worked on. It is set to be released on November 30th 2012 in the UK.

By Rich Cline
Very Good
Ozon is back in sensitive-drama mode for this almost subliminal personal story of a young woman trying to piece together the fragments of her life and understand her conflicting expectations and desires. But it's not easy to get a grip on.

In a posh Paris apartment, Louis and Mousse (Poupaud and Carre) live in squalor, addicted to heroin. They overdose, end up in hospital and, when Mousse wakes up, her doctor surprises her with the news that she's eight weeks pregnant and alone. Louis' mother (Vernet) blames her for everything, so Mousse escapes to an isolated house on the coast. She's joined there by Louis' more sympathetic brother Paul (Choisy). And even though she knows that he's gay, she starts falling for him. Even when he hooks up with someone else (Louis-Calixte).

Watch the trailer for 44 Inch Chest

After I Killed My Mother and Heartbeats, 23-year-old filmmaker Dolan gets even more ambitious with...

Laurence and his girlfriend Fred couldn't ask for a more special relationship. They spend as...

Ozon is back in sensitive-drama mode for this almost subliminal personal story of a young... Watch the trailer for 44 Inch Chest In his day Colin Diamond wasn't really the...