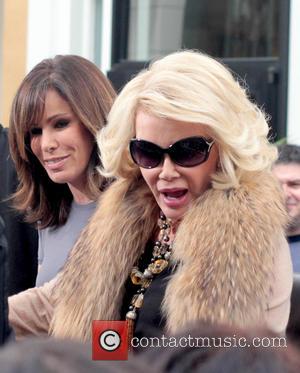 The messy details of Melissa Rivers' recent split with partner Jason Zimmerman were revealed in the latest episode of 'Joan and Melissa: Joan Knows Best?' on Tuesday (February 21st 2012).

Comedienne Joan Rivers' daughter had been in a relationship with sporting coach Zimmerman since 2008, but she was left shaken up on discovering that he had been looking for sex elsewhere on advertisement site Craigslist. The recent instalment of the Rivers' reality show saw Melissa confronting Zimmerman, with whom she had lived with alongside her son Cooper for approximately two years, over the phone after hurling a computer from her balcony.

Related: Joan and Melissa Rivers unveil a bus advert for their reality show

As a group of people struggled to pack up Zimmerman's stuff, Melissa proceeds to ask him: 'Don't f**king lie to me, were you on Craigslist trolling?' Not managing to maintain a brave face throughout the break up, Melissa breaks down in tears, sobbing, 'What did you do to us? Was I that awful that you were gonna f**k people from online?'

'We were trying to start a family, Jason and all you can say is 'I'm sorry'?' She continued, before angrily branding him a 'piece of s**t' for breaking up their family and destroying their future plans. Meanwhile, mother Joan has been deeply feeling for her daughter, releasing a heartfelt Twitter post to her followers reading: 'It is so hard to watch this episode and re-live this moment again. I am just so sorry for Melissa. And Cooper.'