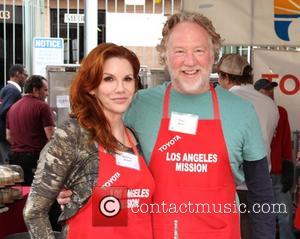 Former child star Melissa Gilbert has mixed emotions about her time on the set of classic drama series Little House On The Prairie because she developed body confidence issues there.

The actress reveals she was a late bloomer and long envied her onscreen rival Alison Arngim's growing bust as they entered their teens in the spotlight in the late 1970s, but she really began to feel insecure about her double-A cup size when the show's costume designers fitted her with a padded bra to make her appear more womanly.

She tells U.S. breakfast show Good Morning America, "The last couple (of) years I was playing the adult version of (her character) Laura Ingalls Wilder, so there was just the assumption that it was time to wear a padded bra, that an A cup was not enough; I had to be a B. I was 16, so you (can) imagine the message in my head: 'Ok, well, these are not right'."

She underwent her first boob job at the age of 25, following the birth of her son Dakota, and continued to go under the knife again and again to keep her breasts perky.

Earlier this month (Jan15), Gilbert revealed she had had the breast implants removed due to health reasons, and she insists the surgery has helped cure her lifelong neck and back pain.

She explains, "I have disc issues in my neck and I have absolutely no pulling in my shoulders and all the pain in my neck completely disappeared since the surgery..."